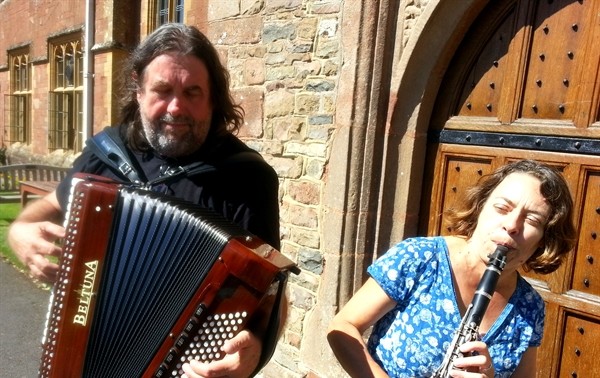 Arrive from 4pm Monday; depart after breakfast on Friday morning.
Full board per person (all meals, accommodation, activities):

For musicians who want to delve into the collection of dance music published by John Playford in the English Dancing Master in 1651. With expert guidance you’ll explore arranging and playing the music in different and danceable ways.

Karen Wimhurst is a freelance composer and clarinettist.  She has been commissioned by festivals, ensembles and theatre companies throughout the UK. Her recent theatre production with the Custom’s House  ‘Get Up and Tie Your Fingers’ has just finished touring the east coast of Britain.

In the 1990’s she set up ‘the Cauld Blast Orchestra’ one of the first experimental groups to fuse jazz, classical and traditional musics.  Since then she has worked across these traditions.  Currently she performs with the jazz ensemble Misbehavin’ and free jazz outfit Zaum (‘the most exciting group in Europe today’ Penguin Guide to Jazz ‘06’)

On the folk circuit she performs with PLF, Pagoda and tours her own show ‘Fruit of Paradise’.

She is a regular tutor with Distil and Halsway Manor.

Paul Hutchinson grew up in Bournemouth and studied piano and church organ. At the age of 17 his father persuaded him to take up the accordion and form a ceilidh band. The Old Pull & Push rapidly became established, performing all over the UK, and appearing at many folk festivals.

In 1995, Belshazzar’s Feast were born after meeting in a field for a rehearsal with the now defunct Life of Reilly. BF are still on the loose with a busy performing schedule and twice yearly tours. Among their many highlights was a nomination for Best Duo at the BBC Folk Awards in 2010. After moving to Wales in 1997, Paul met composer John Hymas and together with Tony Harris formed the trio Hoover the Dog. Their music was difficult to categorise but attained a cult following amongst musicians and aficionados of good music both in the UK and Europe. Collaborations followed with Fluxus (Belgium) to form Okavango, Diversions (The Dance Company of Wales) and the internationally renowned violinist Jan Hruby (Czech Republic).

One of Paul’s core beliefs is that music shouldn’t be pigeon-holed and  has an open mind to quality music regardless of the source. His ‘Desert Island Discs’ would have to include music from: Prokofiev, Bach, Emerson Lake and Palmer, Robert Plant, James Taylor, West Gallery,  Tin Hat Trio, Nick Pynn, Arvo Part and Dino Saluzzi.