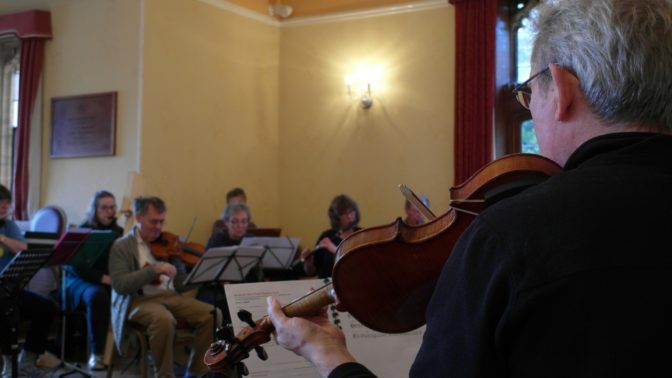 Featuring dance tunes from the popular and extensive Playford collection (1651-1728) this is a course for competent instrumentalists who want to take their playing to the next level. With expert guidance from Karen Wimhurst, Richard Heacock & Paul Hutchinson, you’ll explore harmony, rhythm, articulation, accompaniment, improvisation and arrangement, leading to a stylish performance for a Playford Tea Dance on Thu 1 March at 2pm.

Most instruments can be catered for, but you’ll need to read music sufficiently well to learn the tunes and play them up to speed. Sheet music and recordings will be available to download in advance.

Karen Wimhurst is a freelance composer and clarinettist. She has been commissioned by festivals, ensembles and theatre companies throughout the UK. In the 1990’s she set up ‘the Cauld Blast Orchestra’ one of the first experimental groups to fuse jazz, classical and traditional music. Since then she has worked across traditions, performing with the jazz ensemble Misbehavin’ and free jazz outfit Zaum and, on the folk circuit, PLF, Pagoda Project (with Paul Hutchinson), plus her own show ‘Fruit of Paradise’. She is a regular tutor with Distil and Halsway Manor. www.karenwimhurst.co.uk

Richard Heacock is a violinist, and started playing for folk dance in Oxfordshire, with the Vale Islanders Playford group and Icknield Way Morris. He played in English traditional group Boldwood for many years and produced their first CD “Feet Don’t Fail Me Now”. He currently plays in Breton trio The Andro Sisters and appeared as an on-screen musician in two series of BBC TV’s “Poldark.” Besides previous Halsway visits as a tutor on Playing Playford courses, Richard  also played for the first French and Breton dance course (with Paul Hutchinson) and for the Poldark Dance Weekend.