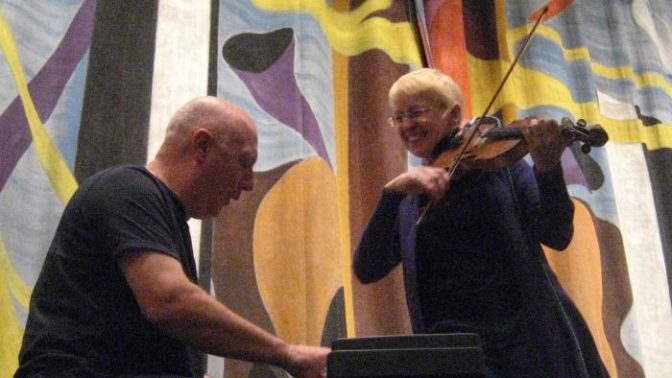 Led by Gareth Kiddier and Linda Game (The English Contra Dance Band), you’ll explore all aspects of playing in a dance band: from putting a band together, deciding on a repertoire, creating a set list, working on stage with callers and technology, using light and shade in dances, and – most importantly – having fun.

Expect a range of workshops and a chance to play as much as you want, leading to a dance on the final night with caller Simon Maplesden and invited dancers!

The course assumes no prior experience of playing in a band, although experienced musicians are very welcome. Both sight readers and ear players are encouraged. You will need to have a basic level of ability on your instrument, though not every band-member needs to be a virtuoso!

English Contra Dance Band are one of the most well-known contra bands in the UK; they’ve performed at all the dance series and folk festivals that there possibly are for contra bands to do in this country, several times over, plus they’ve toured in America and are established favourites on the Danish contra dance festival scene (yes, there is one). They are also regulars at Halsway Manor playing for dance courses and weekends. But don’t be distracted by the ‘Contra’ moniker; they have an ever increasing Playford repertoire and enjoy playing for all kinds of English Country dance too!

They are of course excellent dance musicians – once you start dancing to them, you don’t want to stop – but more importantly, they are friendly, experienced and approachable tutors, who are really looking forward to sharing their skills with you!

Gareth Kiddier (piano) has been playing on the folk dance scene for in excess of 15 years and is a passionate dancer, all of which shows in his driving rhythmical support of the dance tunes using well considered harmonic chords. When not with ECDB, he may be heard playing most weekends of the year with The Watch, PolkaWorks and other occasional line-ups.

Linda Game (fiddle, mandolin) has been playing folk based music for over 20 years since she escaped from the Classical world! In addition to being fluent in a number of styles she is able to take tunes into another dimension with her stunning improvisational ability and rhythmic sense, making her a particularly exciting dance musician! Over the years she has worked with the American Appalachian dance team Broken Ankles and pursued other American styles – Cajun, Texas swing, Old Time – with the band The Kitchen Girls. In addition to other projects she currently plays with The Fold, a Brighton based, international Folk Rock band, and until very recently with the acclaimed contemporary folk trio Zoox (who have now decided to go their separate ways).