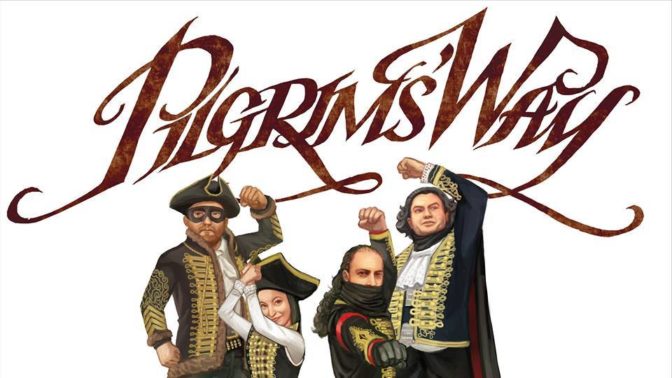 Avoided at all costs, scorned and mocked, these villainous figures have fascinated and alarmed the good people of England for years. Now they’re making an album about highwaymen.

Pilgrims’ Way are often accused of stealing a living, so for this, their third studio album, it made sense to draw from the rich seam of the highwayman ballad. From the derring-do of Robin Hood bashing the bishop, via Dick Turpin’s doomed attempt to obtain legal aid under a Tory government, to ‘The Box on her Head’, the dramatic and unforgettable tale of a young lady with a box on her head, the album covers centuries of inflated stories, glorified violence, sexual innuendo, and the common man breaking all the rules in a desperate bid to put right what once went wrong, and hoping each time that his next leap will be the leap home.

Incorporating over 40 instruments, a dozen songs, and a riotous feel-good energy throughout, this is a magnificent tour-de-force by a band at the absolute peak of their overdraft.

Expect energy, choruses, and gold brocaded Hussar’s jackets galore! The powerhouse 5 piece arrangements will send you home dancing, and with an overwhelming desire to hold up and rob some stagecoaches.

Pilgrims’ Way are the real deal. I am genuinely impressed by their understanding and feel for the music – a young band I expect to hear great things from in the future.