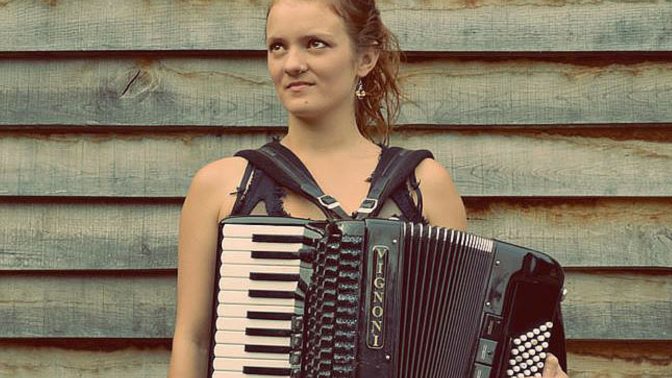 An intensive weekend for piano accordion players of all ages and abilities to learn from three great musician/tutors – Murray Grainger, Hannah James and Jane Ward (beginners). There will be work on technique, repertoire and interpretation of folk tunes in small groups, with time for individual tuition, plus informal evening sessions and a Saturday night tutors’ concert. We have a dedicated tutor (Jane) to work with beginners and help them get the most from the weekend.

The course is aimed at piano accordion players of all levels.

“Always a lovely friendly group and great to feel quite comfortable about changing groups if you felt in the wrong place. Inspiring and challenging.” Participant

Hannah James – despite her tender years – is a veteran of the folk festival and club circuit, as an accordionist, singer and clog dancer. With Kerfuffle, she made five albums and appeared at festivals throughout the UK and abroad, and continues to work as a duo with fellow Kerfuffle member Sam Sweeney (nominated BBC Radio 2 Horizon Award). She has featured on albums by Bella Hardy, Fay Hield and Spiers and Boden, and played in accordion trio Hell Said the Duchess (with Karen Tweed & Beckie Price). As a champion clog dancer, she has been a mainstay of The Demon Barber Roadshow and heavily involved with the development of their theatre show Time Gentlemen Please! More recently she has developed and toured her first solo show Jig Doll, a ground-breaking piece of live performance, combining song, music, and dance. Hannah is also, of course, a member of Lady Maisery, our 2017 Artists in Residence.