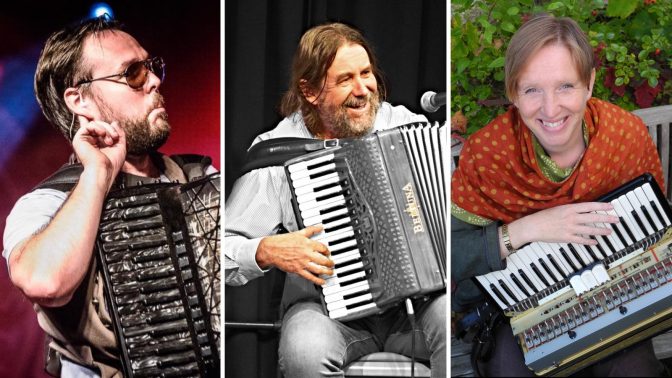 An evening performance of genius piano accordion from the tutors of Halsway Manor’s Piano Accordion Weekend.

Becky Price took up the accordion aged 22. She developed a distinctive style  inspired by her love of Blowzabella, French melodeon players & the church organ music she played as a teenager. She played with numerous bands including Finality Jack, Boldwood, Hell Said the Duchess, and Honeymoon Trio. She also appears on albums with her hero’s Jon Swayne & Dave Shepherd.  As a pianist she contributed to Sam Sweeney’s Unfinished Violin album and her solo piano album  recorded in 2011 is overdue to be released. She has been teaching accordion since 1996 festivals, residential weekends, down the bottom of the garden and has been a guest tutor for the National Youth Folk Ensemble. We welcome her to Halsway Manor.

Tutor Jane Ward will be leading a beginners accordion weekend alongside this course for more advanced players.