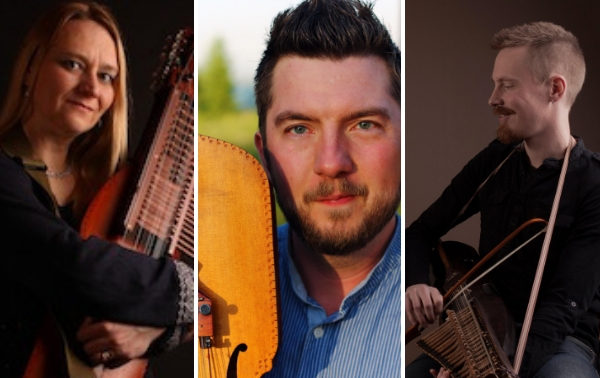 A Saturday evening gig from our International line-up of tutors for our ‘Harpas at Halsway’ Weekend! See and hear the Nyckelharpa – a traditional Swedish ‘keyed fiddle’ – in the hands of three of Europe’s finest exponents of the instrument.

Daniel Pettersson comes from Västerbotten, a northern region of Sweden. Having grown up in the world of traditional music, he is now recognized as a very fine interpreter and innovator of northern repertoire. Daniel studied at the Eric Sahlström institute and at the “folkhögskola” in Malung. He gives concerts and teaches throughout Sweden and abroad. He has featured on several recordings and collaborated with musicians of different styles. Daniel was awarded the title of “nyckelharpa world champion” in the year of 2000. In 2014 he became the first to earn the title of Riksspelman, interpreting the Västerbottnian repertoire on the kontrabasharpa (a 1800-century-style Nyckelharpa).

David Eriksson comes from Västerbotten in the north of Sweden but now lives in the north part of Uppland. He is a member of several bands and constellations and he frequently appears as a guest artist in many different kinds of bands and genres. He is a professional nyckelharpa player and he studied at Eric Sahlström Institute for nyckelharpa, and continued with a Bachelor’s degree and pedagogy degree at the Royal College of Music in Stockholm. He is a “Riksspelman”, has won the Swedish championship in older traditional nyckelharpas, and has received several other scholarships and awards. 2016, he won the worldchampionship on the kontrabasharpa. Beside the bands, he works as a teacher, composer, writer and a freelance musician and he is also a nyckelharpa maker. More at: http://www.massivet.nu and http://www.lyy.se

Vicki Swan graduated from the Royal College of Music on double bass, specialising in performance. Well known on the British folk scene she is a full time folk musician performing on nyckelharpa, bagpipes and singing. Being half Swedish the nyckelharpa was a natural choice to add to her armory of instruments and is now leading the development of the nyckelharpa in Great Britain with the UK Nyckelharpa Project. In addition to various duo recordings Vicki has published several books for nyckelharpa and worked with Soniccouture to create a nyckelharpa sample pack. Vicki is a qualified teacher, specialising in instrumental teaching and has a masters in Education (specialising in distance tuition on the Scottish smallpipes) and composes and arranges music for the nyckelharpa and other ensembles. She is a member of the ENCORE (European Nyckelharpa Co-operation – Orchestral Experience) for 2013 and a tutor on the International Nyckelharpa Days in Germany in 2014 and 2015.