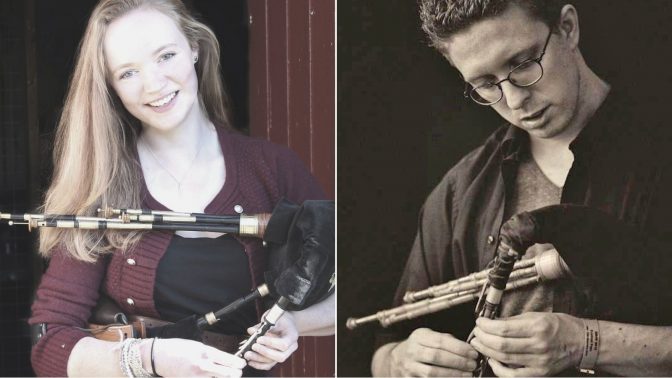 Hosted by Christine Corkett this popular workshop weekend will be led by a great teaching team of pipers, Andy May, Pauline Cato, Alice Robinson and Rob Say. We’ll also be running a Beginners’ Taster Day – details to follow.

The weekend offers a enjoyable opportunity to develop ability, technique and repertoire with a variety of workshops, sessions, and a performance from the weekend tutors.

You’ll work in groups according to ability level, with the opportunity to work with all tutors over the course of the weekend. Music will be available in advance.

Pauline Cato with her extremely accurate staccato approach, has brought a fresh and exciting sound to the Northumbrian bagpipe tradition. While she’s has shown a mastery of the traditional repertoire of Billy Pigg and Tom Clough, Cato has become known for her unique bagpipe renditions of songs by such folk-like songwriters as Richard Thompson and Jay Ungar. In addition to performing as a soloist and in a duo with Tom McConville, Cato has worked with Alistair Anderson and the Northern Sinfonia Orchestra in the opera Cullecoates Tommy. Cato has become a highly respected instructor and has taught courses in the United Kingdom, Germany, and the United States.

Rob Say was surrounded from childhood by music, he started playing concertina at the age of sixteen and picked up the pipes soon after. His repertoire and musicality is firmly grounded in the vibrant traditional music of the North East of England. Rob can be found playing solo or with the Wall Star Village Band at numerous local dances, village suppers or evening entertainments in Northumberland. In addition to music, his day job involves explaining how to solve problems with ‘computers and stuff’. Occasionally computers and music get mixed up – and the Northumbrian Smallpipes Simulator got built as a result.