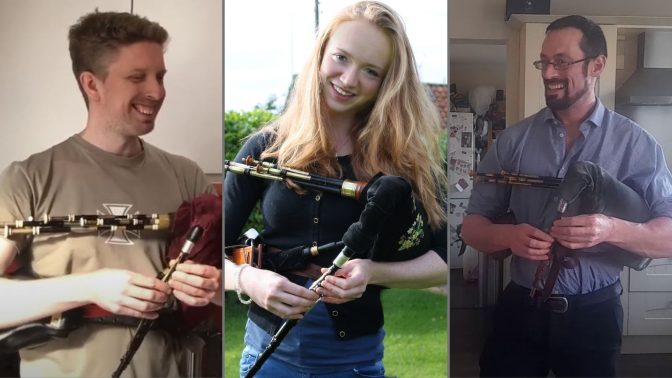 Our long-running and hugely popular annual NSP Weekend was cancelled earlier this year due to COVID, so we’re delighted to have found a spot in our programme to sneak this weekend in! It will be led by a great teaching team of pipers Andy May, Andy Lawrenson and Alice Robinson. The weekend offers a enjoyable opportunity to develop ability, technique and repertoire with a variety of workshops and sessions, plus a very informal performance from the weekend tutors, all in the lovely setting of Halsway Manor!

The weekend is not for total beginners – you’ll need to be able to play simple tunes at a steady pace, and to read music / pick up tunes quickly by ear – but beyond that, all ability levels are welcome. We’ll divide into smaller groups for the tutored workshop sessions, which will be tailored according to ability level.

Music will be available in advance. We’ll publish a programme soon.

Alice Robinson comes from Northumberland, and has played the Northumbrian Smallpipes for 20 years. She attended music school in Scotland for eight years and, during this time, she was a part of Kathryn Tickell’s youth group ‘Folkestra’ and was taught pipes by Dr. Anthony Robb. In 2009, she was a finalist in BBC Radio2’s Young Folk Musician of the Year. Since then, she has been broadcast on radio, including live on BBC Radio3, and has performed as a soloist with the Royal Northern Sinfonia Quartet and the Scottish Youth Orchestra. She has recorded a few albums with the Windy Gyle Band, with whom she has enjoyed playing at folk festivals (she particularly loved being at the 2014 Strakonice Bagpipe Festival in the Czech Republic). Alice is passionate about musical academia too; she has a 1st class degree from York University and a Masters from Durham University, where she has just completed her PhD in British music.  In the last year, Alice has played with the St-Martin-in-the-Fields choir, recorded two tracks on Jack Rutter’s critically acclaimed new album, and performed in a composition by René Aubry for BBC One. Her set of pipes were made by David Burleigh and she often plays a chanter which was made by Colin Ross.

Having been a keen participant in piping competitions as a youngster, he continues to be a supporter of competitions, sometimes taking a role in organising, sometimes as competitor.

Andrew is closely involved with the dance traditions of Northumberland and takes much  inspiration from the need to play in a smooth, controlled manner. The links between piping and clog, rapper and ceilidh dancing have been a huge influence in his playing.

Returning to Newcastle after some years in Scotland, Andrew jumped at the chance to learn to make reeds. He cites this as a hugely liberating experience. Thanks are owed here to the Gateshead Pipe-makers’ Cooperative for their support and encouragement. Reedmaking has led him to move into pipemaking, tuning and repairing.

His philosophy on piping is that we need to re-examine our own playing styles every so often and identify aspects of style which could be improved. No matter what the stage of playing, we all have something to learn!