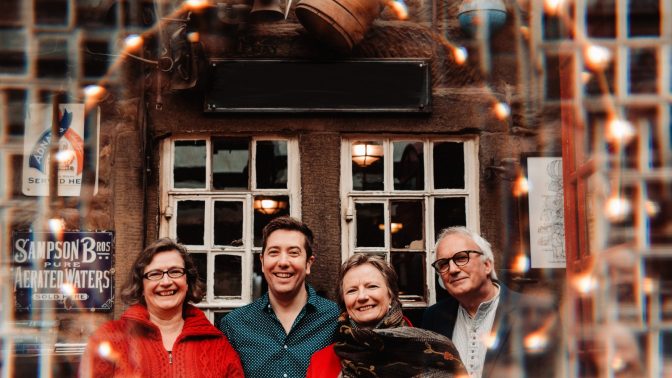 Following on from their joyous – and packed – vocal weekend in 2018, we’re delighted to welcome this quartet back but with a difference; Lester Simpson has decided to hang up his travelling shoes, which means that Narthen are now joined by the velvet-voiced, BBC Folk Award Nominee Jim Causley!

In the company of Barry Coope, Jo Freya, Fi Fraser and Jim Causley, you’ll enjoy a sensational weekend of polyphonic unaccompanied singing in four part harmony, with a tutor to lead each section of the choir.

We’ll look at some of those beautiful four part Yorkshire and Derbyshire carols and other festive fair, for which Narthen are so well known. Whilst this will set you up with some fantastic singing material for the festive season it won’t all be about Christmas; there will be other songs too!

Whether you like to sing bass, alto, tenor or soprano or move around between those you’re welcome. You don’t need to read music but music will be provided. The sound of massed voices together is, dare we say it, ‘heavenly.’

There will be a public concert on the Saturday night.

Singers of all levels of experience who want to have fun singing in harmony! You do not need to be able to read music; it may be provided for some songs but you will have time to learn the parts by ear and use the scores as a guide. The songs are meant to be sung with men’s and women’s voices on all parts. You may come thinking you’re a bass singer and end up doubling the soprano line. You may be a soprano on one song and a tenor on another.

Barry is well-known as one-third of Coope Boyes and Simpson and Jo and Fi play and sing in many bands as well as being part of ‘Voices at the Door’ for shows featuring the stories of acclaimed author Michael Morpurgo.

Narthen are known for their specialism in the polyphonic carols but their repertoire extends far beyond the festive season. All being talented multi-instrumentalists, they also augment their vocal harmony sound with piano, accordion, fiddle, soprano sax, ukulele and whistles.

“The finest singer of his generation” – Mojo Magazine

More than simply a folk-singer, multi award winning singer-songwriter, musician and proud Devonian Jim Causley is an all-round entertainer and during the past decade has been nominated no less than six times for a BBC Radio 2 Folk Award. A prolific collaborator, Causley is hugely admired for his work with iconic groups The Devil’s Interval and Mawkin:Causley as well as playing, touring and recording alongside Waterson:Carthy, John McCusker, Eddie Reader, Graham Coxson, Shirley Collins, Michael Morpurgo, Show of Hands, Kate Rusby, David Rotheray of Beautiful South fame and many more. He’s the natural choice to join Narthen!