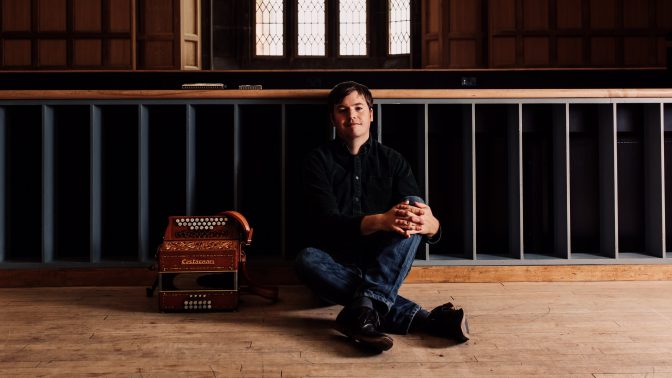 Join us for a half-day Melodeon workshop with Will Pound to develop the way you play.

The focus will be on bellow control, rhythm, chord shapes and major and minor scales. Will is a great believer that the melodeon is not as difficult an instrument as it is made out to be! He’ll show you a few simple steps to get you started on the way to finding your own style and understanding how the instrument works.

The focus will be on different bellows techniques, cross-rowing to improve chord choices, percussive techniques, accompanying singers and other instrumentalists and rhythm.

Rather than just learning tunes we’ll look at ways to improve the tunes you already know and ways to apply the things you learn to tunes you will learn in the future.

Will is going to be playing a gig at Pebbles Tavern on the evening of 23 November.

Will Pound is a multi-instrumentalist best known as one of the finest harmonica players of his generation. Today he’ll drawing on his skills as a melodeon player to lead this workshop for Beginners to Advanced players.

Will Pound has pushed the boundaries working on a number of projects and musicians which in the past and present include The Will Pound Band, Martin Simpson, Guy Chambers, Concerto Caledonia, Michelle Burke’s Step into my Parlour and The Hillsborough Charity Single.

Will has been nominated 3 times for the BBC Radio 2 Folk Musician Of The Year Award in 2012, 2014 and 2015, has won FATEA Magazine Instrumentalist Of the Year 2013, 2014 and also was nominated for Songlines Magazine best newcomer.