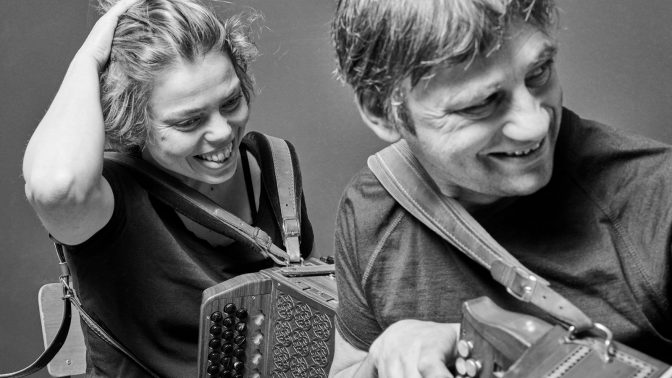 We are delighted to welcome two of Europe’s greatest exponents of the diatonic button accordion to teach this extended course at Halsway Manor for advanced, and advanced-intermediate level players. Anne Niepold is a familiar name to many at Halsway, having been a regular tutor on our DG Melodeon and European Music Weekends. Likewise, Andy Cutting needs no introduction. Anne and Andy’s exalted collaboration as a duo has been somewhat interrupted by COVID but you can find out more here: https://www.facebook.com/Niepold-Cutting

This will be an intensive week of skills-based learning focusing on your development as a musician, discovering new ways to interpret and play, and to make the music your own. We’ve deliberately chosen two musicians with a lot in common, but also with quite different backgrounds and repertoire so you’ll benefit from contrasting approaches in their playing and teaching. You need to be open to trying new things, and to be prepared to work hard – it will be intensive but also an enjoyable and rewarding week, with time to relax in the evenings and enjoy informal sessions.

The group – limited to approximately 20 students – will be split in two by the tutors at the start of the course; you’ll spend roughly the same amount of time with each tutor. This will be done according to ability level; if you are coming with friends this may mean you will be working in different groups, but there’s plenty of informal time to meet, chat and play with others.

Arrival is from noon on Monday, with lunch at 1pm, and we begin playing at 3pm!

Anne Niepold (Belgium) is an extraordinary accordionist and composer. She is also an enthusiastic and inspirational teacher with a great sense of fun!

Anne studied in the jazz department of the Royal Conservatory of Brussels and attended many courses and masterclasses. As a performer she is a true force of nature – brash, adventurous and phenomenally skilled, she takes the humble accordion in startling directions. Beside her solo projects, she performs with numerous arts companies at home and abroad, and has numerous recordings to her name.

Andy Cutting is a rarity. A musician’s musician: a soulful and technically outstanding melodeon practitioner with an ear for a fine tune. Many of his tunes have been purloined along the way: some considered contemporary classics on the folk scene. But then, Andy is also a warm and emotive performer, modestly engaging his audiences with his self-deprecating wit and then flooring them with downright staggering musicianship. There are few melodeon players who put so much feeling into their playing, whether it be a set of dance tunes, or accompaniment to a slow English ballad.

Andy has been a consistent musical force since he came swiftly to prominence with the innovative Blowzabella. As well as a thorough grounding in the English tradition, Andy’s influences extend way beyond these isles, particularly to the music of Central France and to the storming Quebecois tradition. These influences will be well-known to all those familiar with Andy’s duo with English fiddle player, guitarist and singer, Chris Wood. Wood & Cutting became one of the most influential, and enduring duos on the scene; paving the way for the explosion of many of today’s thrusting young newcomers.

Andy’s commitment to, and sense of pride in traditional music, as well as his sensitivity and understanding of the form, has made him one of the folk scene’s most wanted, playing for many years with Kate Rusby, June Tabor, John McCusker and Under One Sky to name but a few. There is also a growing demand for him to play outside this genre. He has recorded with Sting, John Illsley (Dire Straits), Roger Daltry and was asked to join The Who for an acoustic concert in aid of the Teenage Cancer Trust at the Royal Albert Hall. As well as his ongoing solo work, Andy is currently working with Leveret, Topette, Martin Simpson, Anne Niepold, Blowzabella, Roger Daltry (playing various charity gigs), and is a regular tutor for the National Youth Folk Ensemble.