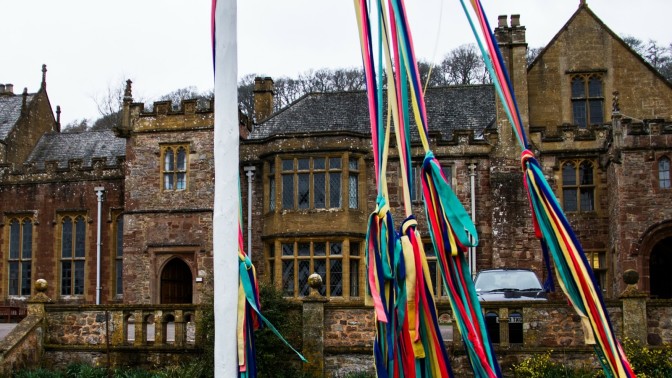 An Autumn folk dance break for all abilities with a packed programme of workshops, evening dances and some time off in the afternoons to explore the local area or to simply enjoy being at the Manor. Caller Ron Coxall is well known for his encyclopedic knowledge of folk dance. Stradivarious (Rod and Frances Stradling with Poppy Weatherall) provide musical accompaniment.

“Relaxing break with good company and a quality team” Participant

Dancers of all abilities. If you are in any doubt as to whether you have enough experience to join this course, please contact us. We are more than happy to advise you.

The course is run by popular caller Ron Coxall. Rod and Frances Stradling are present as musicians, but will also help make sure you enjoy and get the most from your holiday.

Caller Ron Coxall is well known for his encyclopaedic knowledge of folk dance, for his own dance compositions and for his ability to put everyone at ease.

Rod Stradling joined his first Morris Team in the early 60s and, shortly after that, started Scottish Country Dancing and rapper sword dancing at school. In the 70s he joined the Beaux of London City Morris Men and took up playing the piano accordion at folk clubs and for folk dances. When resident in the States he played for English and Scottish Country Dance groups which led him to the Strathspey and Reel Society of New Hampshire shortly after it was formed. Here he made his first CD with Barbara McOwen as part of The Carfuffle Ceilidh Band, appearing several times at Pinewoods, a camp site on Cape Cod dedicated to traditional dance and music. He is based in the Midlands and is a member of Green Man’s Morris and Sword Club. Over the past couple of years he has played at many dances and appeared at festivals at Sidmouth, Eastbourne, Lichfield, Whitby, Purbeck and Southam.