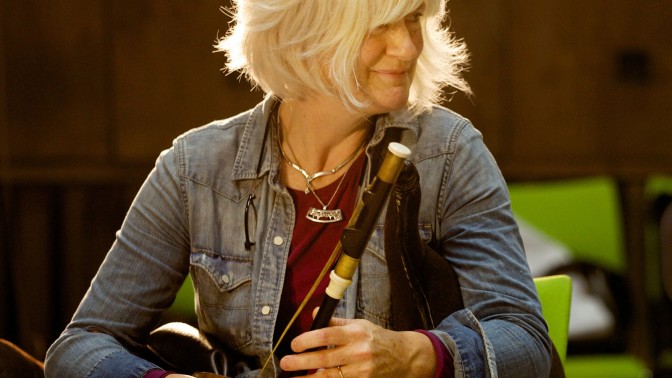 Join us for an evening concert with headline and supporting tutors from the pipes, whistles and flutes weekend!

Máire Ni Ghráda grew up in Cork where she learned the pipes from the great Mícheál O Riabhaigh of the Cork Pipers Club. Throughout the 1970s, she played with Comhaltas and travelled with other musicians to the US , UK and Europe. She has been featured on radio and television as well, often with her brother, flute player Conol O Ghrada. She lives in Co. Clare, near Limerick City and was a founding member of the Limerick Pipers’ Club, where she teaches regularly. Maire has taught at several tionols in the US and Germany and has performed in such prestigious venues as the Willie Clancy Summer School’s piping concert and the William Kennedy Piping Festival. She plays a Koehler set and also a C Woof set.

Conal Ó Gráda has long been at the forefront of traditional Irish flute-playing and truly has one of its most distinctive sounds. A multiple All Ireland winner in his youth, Conal’s debut recording ‘The Top of Coom’ in 1990 is still regarded as a seminal recording of flute-playing. Conal teaches flute privately in his native Cork and is also a regular teacher at summer schools worldwide, including The Willie Clancy Summer School, Catskills Irish Arts Week and Blas. He is a co-founder of the flute band ‘Banna Fliúit Loch a’Bhogaigh’ and is chairman of Co. Corks’ annual traditional flute festival ‘Cruinniú na bhFliúit…the Flute Meeting’ He is a member of the band The band Raw Bar Collective, and 2012 published a book on flute technique and styles – An Fheadóg Mhór.