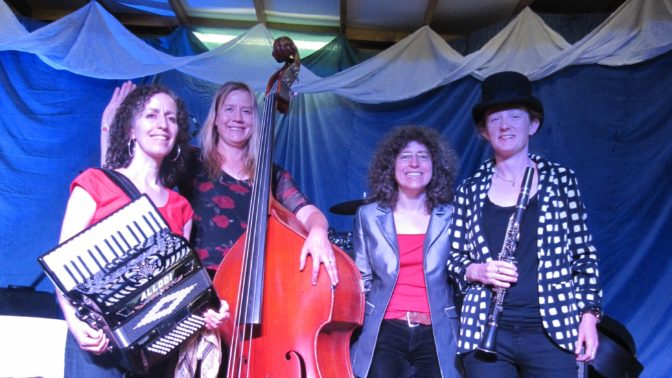 Please note: A patron has contacted us today to report a problem booking tickets for this gig. We have been unable to replicate the problem. If you experience any difficulty making a booking please call us on 01984 618274 ext 2 (Duty Manager) and leave a message stating the number of tickets you require; they will be available for you on the door.

“Virtuosity, exciting original tunes and soulful playing. What’s not to like?” Songlines Magazine

Delve into the wonderful world of klezmer with members of the London Klezmer Quartet. Ilana Cravitz (violin), Susi Evans (clarinet and accordion), Josh Middleton (piano accordion) and Indra Buraczewska (double bass & vocals) will take you deep into freylekhs, bulgars, zhoks, khosidls and terkishers. This gig is part of Klezwest a weekend of Klezmer music at Halsway Manor.

The London Klezmer Quartet is a dynamic group of performers whose deep understanding of klezmer, the celebratory and soulful music of Eastern European Jews, is reflected in exuberant, passionate and accomplished performances that captivate audiences of all ages and backgrounds.

The group plays old and new traditional material guaranteed to move audiences from toe-tapping to tears and back again in moments.

“Dynamic and authentic” Time Out

LKQ was formed in 2009 by a group of klezmer specialists keen to explore the almost-lost wedding music tradition of Jewish eastern Europe. The band was swiftly picked up by some of the UK’s foremost folk & world music promoters – Songlines Magazine, Continental Drifts and The Magpie’s Nest offered stages for the group’s unique combination of artistry and exuberance.

The band has played UK venues and festivals including Cafe Oto, the Green Note, Kings Place, Rich Mix, Southbank Centre, Victoria & Albert Museum and the Vortex Jazz Club. Festivals include Blysh Festival (Wales), Kings Place Festival, Klezfest, Songlines Festival, and Women of the World Festival. LKQ has also been part of UK rural touring schemes in Dorset, Gloucestershire, the north of England and Wales. Internationally The London Klezmer Quartet has opened Jewish music festivals in Sao Paolo Brazil (Kleztival), Gelsenkirchen and Munich. In the course of six tours, LKQ has played to packed houses around Australia, headlining at the National Folk Festival in Canberra two years running and other festivals including the Blue Mountains Music Festival, Fairbridge Music Festival, Illawarra Folk Festival and Port Fairy Folk Festival. LKQ has also performed in Holland, New Zealand, Sweden, and Latvia. So they are very welcome here for an evening of music and dance at Halsway Manor.