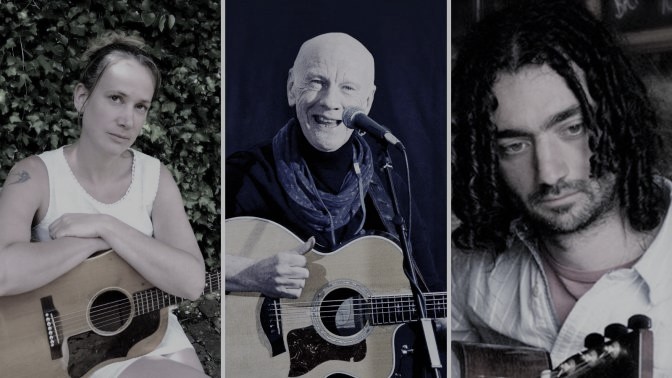 Kevin Dempsey is an unassuming sort of bloke, whose quiet manner and laid back attitude hide a multitude of extraordinary talents as guitarist, singer songwriter, composer, arranger and producer. His wide experience shows in his versatility and ability to turn his hand, and guitar, to many different styles and genres and, for a long time, he has been sought out by other musicians. www.kevindempsey.eu

His CV includes countless contributions to some of the UK’s best-selling guitar magazines; Guitar Techniques, Total Guitar, Acoustic, and notably, over 130 consecutive monthly guitar tutorials spanning more than a decade of issues of Guitarist Magazine. He was also Head of Further Education at the Academy of Contemporary Music in Guildford, Surrey, and he leads workshops at guitar festivals and events around the UK. www.tristanseume.co.uk

Vera Heeringen is an accomplished and highly acclaimed multi-instrumentalist and songwriter. She was part of the brilliantly comedic New Rope String Band for five years and has toured with several Cajun and Old time greats such as Dirk Powell and Sheryl Cormier. In recent years Vera has been performing with her own trio and has just released her third album ‘Won’t be Broken’ which has been described by the press as her best yet. Vera has taught guitar for over 10 years and is known for her inclusive approach which aims to inspire in a laid back and enjoyable way.