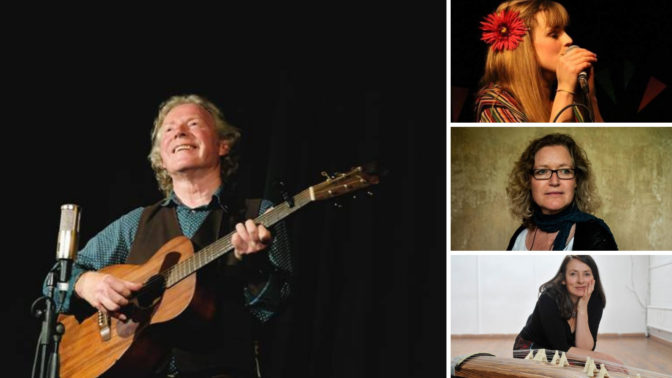 During this weekend songwriting retreat in the glorious house and surroundings of Halsway Manor in Somerset, singer-songwriter Reg Meuross and his team – Melissa Holding, Katie Whitehouse, and Jessi Norgard – will guide and support you in the art of expressing yourself through writing songs and music, with a particular focus on opening up your imagination in new ways and combining this with what you know from your memories, with what’s in your heart and with what you experience around you; how a chance meeting, a face in the crowd, a news article or an odd phrase overheard, or just the sheer beauty and power of words can be the impulse for an act of imagination that becomes a song.

Few lyricists write with such imagination. Reg’s songs are rich with extraordinary characters and scenarios, laced with socio-political commentary, romance, and deep human understanding. Reg explains: “Songwriting is not about being great or better than anyone else or working to a formula or following rules. It is about personal expression, speaking your truth in a way that people can hear you. I can offer you tools to help you dig deep and ways of unlocking words and inspiration.”

Comments from past workshops:

“There’s a subtleness to his approach that means what he says sinks in much better than were he to appear to be lecturing a class. Before you know it, you’ve got a notebook and head full of ideas for your songwriting that would have seemed fanciful that same morning.”

“I went home with renewed enthusiasm for the art/craft of songwriting, and with more direction and focus, I hope, to what I’m doing.”

The weekend combines workshops and song writing exercises with plenty of space to walk, think and write as well as two relaxed evening sessions in the bar where everyone gets a chance to share songs, folk club style. There will be an opportunity to meet in small groups with Reg and the team to get feedback on songs you have written, and with Katie for tips on finding your own unique path in today’s music world. The weekend will end with an beautiful early evening Sunday concert, headlined by Reg and opened by Jessi Norgard and special guest Melissa Holding.

Weekend participants can stay on for a light supper and gig for an extra £20 per person, or light supper, concert, B&B for £45.

The weekend is suitable for songwriters of all genres and levels of experience.

Reg Meuross’ reputation has been well earned. From gigging in village halls and folk clubs to playing the Royal Albert Hall and huge festival stages in the UK and abroad, Reg consistently entrances his audiences with songs of life, love and injustice, soulfully delivered with melodic tenor vocals and exemplary guitar playing.

“Calling Meuross a singer-songwriter really doesn’t do the man justice. Meuross doesn’t write lines of lyrics. He writes short stories then sets them to some of the most captivating melodies you’ll ever hear.” – Pennyblack Music

Joining the team this year is Melissa Holding, a musician, composer and teacher specialising in the Japanese koto. She has written music for dance, theatre and silent film, facilitated workshops with children and adults and has performed and recorded with many bands and ensembles. Her work draws on different traditions including folk, classical and improvisation. Reg saw an opportunity here to involve Melissa in freeing up your songwriting by encouraging you to step out from behind the safety of your guitar (or other instrument) and those ‘same old’ chord patterns, and to experiment with expanding your mind and your writing in new and exciting directions in a well held, safe space.
Melissa will be guiding you while you explore ways of creating melodies through improvising and experimenting with different scales. Her workshop will also look at alternative ways of accompanying yourself and playing with texture and harmony.

Katie Whitehouse, Reg’s manager and a musician herself and singer-songwriter Jessi Norgard will be assisting Reg all weekend and ensuring you know where to be and when throughout the retreat.