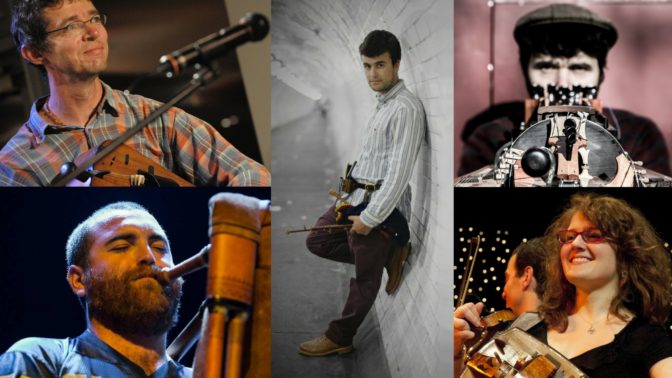 An evening of music (and dancing) from the tutors of our 2018 Hurdy Gurdy & Bagpipe Weekend:

Cecile Delrue-Birot (France) – began playing Hurdy Gurdy in 1998 with Patrice Gilbert in Cric Crac Compagnie. She also learned in many workshops with Gilles Chabenat, Grégory Jolivet, Anne-Lise Foy, Marc Anthony… In 2015 she was awarded a degree in musics from auvergne and limousin in the Conservatoire of Limoges, where she also studied violin with Philippe Ancelin. She continued her studies at the CEFEDEM of Lyon to qualify as a music teacher. She now plays in Maralha (violin and songs from auvergne-limousin), Bresièr (music from auvergne and brionnais), Torgnole (noise music), Les Sœurs Michel (« et Trululu voilà l’beau temps »), Tazon (chabrette and violin).

Joel Turk started playing the Hurdy Gurdy twenty years ago. He was making a living busking, after spending a year studying Indian classical music – he was broke and somebody said that a hurdy gurdy was “a licence to print money”. They lied. What was true however is that it took Joel all over western Europe, playing at festivals, going to out of the way places and meeting musicians from all over the continent, swapping stories and music. He settled in France and spent a few years playing on the Bal circuit with Red Dog Green Dog, Zef and various ephemeral outfits whilst working as a hurdy gurdy teacher for the Ecole de Music et Danse des Landes. Joel still loves playing music for dance and divides his practice between this and more contemporary technique nerdism which he does in a small dark room where no one can hear him. He believes that the inherent restrictions of the instrument are the key to its limitless potential.

Callum Armstrong is an experimental piper who enjoys exploring the possibilities of the pipes. He won the solo prize in 2014 and the ‘Petite Formation’ Prize in 2015 with Cellist George Pasca at the ‘Son Continu’ Festival in France. Callum has recently collaborated with Julian Goodacre to develop a smallpipe chanter with almost 3 octaves, and is currently working developing a technique for the ‘double Scottish smallpipe chanter. Amongst Callum’s current projects are learning and developing reeds for ancient auloi and learning the Musette de cour.

Julien Cartonnet (France) has been playing the Central French Bagpipes since the age of 9. He plays in 16 and 26 inch versions, giving him a choice between a warbling treble and a deep baritone. He has been influenced by playing  Raphaël Thiéry. He continually develops his playing and has mastered the Irish Bagpipes. He also plays the banjo. In 2013 he completed a solo album of bagpipes. He plays in the Anglo-French acoustic dance band Topette.