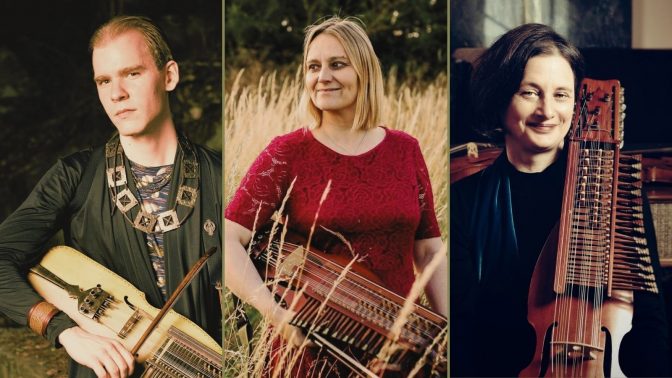 Sunday night supper B&B available (must be booked in advance):

A weekend of workshops, ensemble playing, sessions, a concert and more! Hosted by Vicki Swan, we’re delighted to confirm Johan Lång will be joining us from Sweden, and Kirsty Money from Canada. We’ll also have a maker on-hand to offer advice and assist with small fixes.

Come and explore a diverse range of repertoire, and meet, play and socialise with other players and enthusiasts!

The weekend is for players of all abilities except complete beginners to explore a range of repertoire, and to meet, play and socialise with other players!

“Even if there was no tuition, I would still come; for me it’s now about meeting all the other players.” 2018 Participant

Vicki Swan studied at the Royal College of Music on the double bass. She also plays the various types of bagpipes, flute, recorder, piano and nyckelharpa. On leaving music college Vicki started down the long path of folk music and was only seen on rare glimpses back in classical orchestras. You’ll find Vicki now inhabiting the troll ridden forests on the hunt for new and exciting tunes from the näcken. Vicki plays not only the standard 3-row modern chromatic, but also the 1408 sienaharpa, the 1526 moraharpa, the 1700s kontrabasharpa and the 1800s silverbasharpa. Over the pandemic Vicki has worked tirelessly on a Virtual Music Room to try to help isolated nyckelharpa players remain motivated and focussed on playing and learning. Chances are after all this time alone at home she won’t stop talking at the Halsway weekend….

Johan Lång was born and raised in Uppsala, Sweden, and at the age of 16 he became fascinated by the traditional Swedish instrument called ”nyckelharpa” and the soundscapes it is able to produce. As a ‘Riksspelmanʼ he is an acknowledged practician of traditional Swedish music and has earlier studied at the Royal Collage of Music in Stockholm. Today he’s active as both a musician and a teacher. In Eir, Johan uses the ethereal sound of the nyckelharpa to illustrate different ambiences, be it the wind caressing the top of a mountain or the frigidity of a winter’s morning. https://eirmusicduo.se

Kirsty Money: Coming from Canada, Kirsty is a member for the first violin section in Symphony Nova Scotia. Since taking up the nyckelharpa in 2015, Kirsty has studied the instrument intensely with financial support from the Canada Council and Arts Nova Scotia. She has attended nyckelharpa workshops and festivals in Sweden, the UK, Germany and the United States. Principal mentors include Olov Johansson, Josefina Paulson, Magnus Holmström and David Eriksson. In the fall of 2021 she and duo partner Jude Pelley (aka The Spruce Larks) released their debut album “Out of the Nest”.

Kirsty is a member of the String Faculty at the Maritime Conservatory of Music and has been teaching violin and viola for over 25 years. She has taught the nyckelharpa privately online, in person in Nova Scotia, as well as giving workshops for the American Swedish Institute and at Halsway in the spring of 2019.

To Kirsty, the nyckelharpa is an incredibly versatile instrument.  This coming September she will be bringing her own discoveries about the nyckelharpa, ideas on how to improve technique, as well as inspiring Swedish, Celtic, Old Time, and now her own tunes to share with the participants.  She intends Harpas at Halsway to be a blast this year!