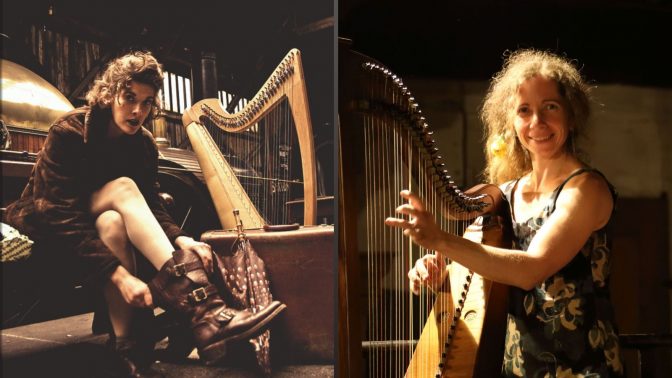 Join us for a delightful evening of folk and traditional music performed on the harp by the tutors of our first Halsway Manor Harp Weekend.

Steph West is both a harpist and singer. She works as a performer, teacher and workshop leader. Whilst studying early music at the University of Birmingham Steph fell in love with the clarsach/folk harp. Steph’s main trad styles are English and Irish and she has worked as a performer and teacher with artists and organisations in both fields: EFDSS, Comhaltas Ceoltóirí Eireann, Irish flute/whistle virtuoso Jacquelyn Hynes, Shooting Roots youth folk arts project, Edinburgh International Harp Festival and Guildhall’s CYM. Steph currently plays with her European bal / swing band Midnight Patisserie and her singer-songwriter duo with drummer Paul Radmeyer. Steph is currently working on English trad repertoire for the harp, bringing out a book and courses in 2019.

The only harpist with 9.5 fingers, Steph also works within the integrated/disabled arts world. She works as a performer with the British Paraorchestra and RNS Moves. She has also mentored for Open Up Music, who are pioneering the National Open Youth Orchestra.
www.stephwest.co.uk