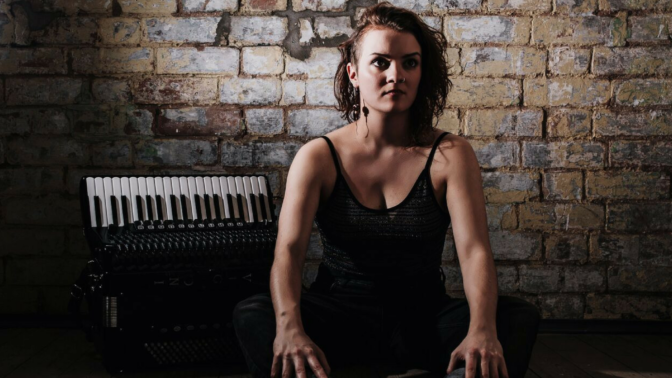 Hannah, Jim and Nicola have all performed together in various guises since they were in their teens. This will be a unique opportunity to see them perform together and separately, expect tunes in bonkers time signatures, stereo clog dancing and maybe a spot of yodelling!

Hannah James (Lady Maisery) is a rarity in folk music – a singer, musician and innovative clog dancer. She has been causing a stir across the folk scene – in all the right ways – with her ground breaking project JigDoll, which combines all of these disciplines in a beautiful new show exploring the life of the travelling player: sometimes exotic, sometimes frightening, it’s a world where home changes daily, and the only touchstones are the skills you carry with you, and the people you meet on the way.

Nicola Lyons is a dancer and fiddle player who began her folk career with the Fosbrooks in Stockport, where from an early age she learned to clog dance in addition to playing both classical violin and folk fiddle. Nicola was a dancer with The Demon Barbers for several years, performing at many of the major UK folk festivals as well as taking part in their acclaimed folk and hip-hop dance show, ‘Time Gentlemen Please’. She is currently a member of alternative folk quartet 4Square who have appeared at festivals in the UK and Europe, including Fairport’s 2009 Cropredy Convention, before an audience of 20,000.

Jim Molyneux studied at Chetham’s School of Music, and the Royal Northern College of Music. He is the co-founder of 4Square (with Nicola) and also a member of the “genre-busting cinematic folk septet” The Fair Rain (formerly The Old Dance School). In 2008 Jim made it to the Grand Final of the BBC Young Musician of the Year, televised on BBC2 to 1.1 million viewers!