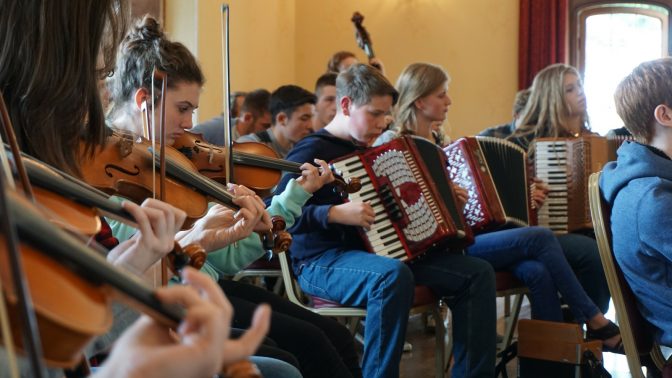 Full board per person (all meals, accommodation, tuition):

Developed from our popular Hothouse project, this week-long music residential for young musicians and singers is designed as an intensive but fun introduction to our folk traditions. It is lead by a team of professional folk practitioners – Will Lang, Nicola Lyons (4Square), Archie Churchill-Moss Moore, (Moss, Rutter), Ford Collier (The Drystones) – with a dedicated pastoral lead to ensure you are well supported whilst away from home.

You will operate as a company: taking warm-ups together, developing technique in music and performance, learning repertoire, and creating new interpretations of traditional material. There will also be down-time to socialise and enjoy being part of an exciting new company of performers! At the end of the week you’ll have the chance to perform what you’ve learned to an invited audience.

“Very long days, however every minute was incredible.” Participant

This course is designed as an introduction to folk for young people aged 13-18. Prior experience – as either a singer or musician – is essential, but it’s ok if you’re new to folk. It’s intensive and hard work at times, but we guarantee you’ll have fun too and make new friends. And if you’re hooked on folk, you can come to our Summer ‘Intermediate’ Young Halsway Week which culminates in performances at Sidmouth Folk Week!

Here are a few videos from last year’s event, to give you a taste of what to expect!

Each place costs £195 to include full board (accommodation and all meals), tuition and all activities. Places are limited and will be allocated on a first come, first-served basis.

We do all we can to offer bursary places to young people with exceptional talent or for whom the opportunity would be especially beneficial, but whose financial circumstances would otherwise exclude them from the programme. Email chiefexec@halswaymanor.org.uk if this is something you would like to discuss.

Will Lang (lead tutor) is a modern British Folk musician, composer and producer. He is well known for his collaborations, bringing a folk influence to many prolific performers including Mercury Music Award-winning Nitin Sawhney, The National Youth Choir of Great Britain, Tabla player Aref Durvesh and Northern Spirit Singers in the BBCs Choir of the year. It is his work in Folk and wider-reaching genres that enables Will to inspire musicians to discover Folk music and encourage them to explore the roots of their traditional music.

His most recent diversion has been joining world-renowned percussion sensation Spark! with whom he has been travelling the world.

Will is a former core tutor of Newcastle University’s Folk and Traditional Music degree, founded ‘Hothouse’ at Halsway Manor in 2010 and has been lead tutor ever since.

Archie Churchill-Moss has been playing melodeon for 11 years. He is best known for his work with English contemporary trio, Moore, Moss, Rutter, who won the coveted BBC Young Folk awards in 2011. He has received tuition from some of the UK’s top box players, including Andy Cutting, Julian Sutton, Saul Rose and Rob Harbron. He is currently working with singer songwriter Ange Hardy and has performed with bands including False Lights and Mawkin.

Nicola Lyons is a dancer and fiddle player who began her folk career with the Fosbrooks (directed by Liza Austin-Strange MBE) in Stockport, where from an early age she learned to clog dance in addition to playing both classical violin and folk fiddle. For several years, Nicola was a dancer with The Demon Barbers, which included performances at many of the major UK folk festivals as well as taking part in their acclaimed folk and hip-hop dance show, ‘Time Gentlemen Please’.

She is currently a member of alternative folk quartet 4Square, who have appeared at many festivals in the UK and Europe, including Fairport’s 2009 Cropredy Convention, before an audience of 20,000.

“4Square are amazing…based on the range of music they tap into: traditional folk, clog dancing, their own compositions, and influences ranging from jazz to Cuban rhythms to Radiohead.” – The Folk Show, BBC Radio 2

Ford Collier (Assistant Tutor) formed The Drystones with fiddler Alex Garden at the age of just 14. They’ve been playing together ever since, including festivals appearances at Glastonbury, Sidmouth Folk Week, Larmer Tree and others. Ford attended Young Halsway residentials at Halsway Manor from the age of 16 and the encouragement of the tutors led him to take the tin whistle seriously as an instrument; it’s now his first study instrument in his music degree at Sheffield University. He is specialising in Irish music on the whistle, learning from brilliant Manchester whistler Grace Kelly and intends to pursue music, teaching and performance as a career.

The team will be completed with a dedicated pastoral tutor.