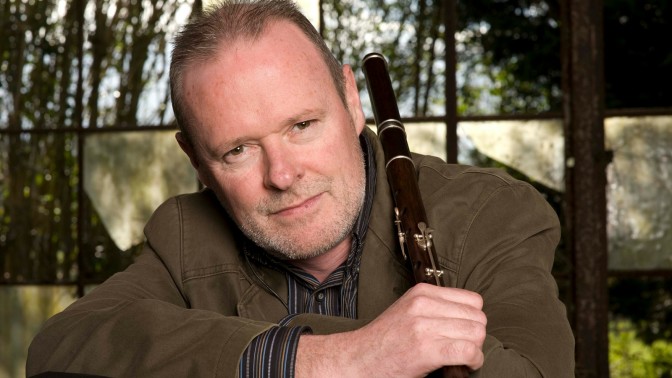 Our regular Uilleann Pipers’ Weekend has expanded into a Tionol for pipes, whistles and flutes! Hosted by the South Western Association of Uilleann Pipers, this is a great weekend to explore repertoire and technique with leading Irish tutors, Maire Ni Ghrada & Conal O’ Grada, reed-making with Alan Burton, one-to-one tuition with Nick Scott, plenty of time for informal playing and socialising, and a Saturday Evening concert featuring the headline and supporting tutors.

Uilleann pipers, flautists and whistle players of all abilities. Supporting tutors will be on hand to expand the programme and make sure you’re kept busy! Most abilities catered for but not complete beginners; you’ll need to read music sufficiently well to learn the tunes and play them up to speed.

Maire Ni Ghrada grew up in Cork where she learned the pipes from the great Mícheál O Riabhaigh of the Cork Pipers Club. Throughout the 1970s, she played with Comhaltas and travelled with other musicians to the US , UK and Europe. She has been featured on radio and television as well, often with her brother, flute player Conol O Ghrada. She lives in Co. Clare, near Limerick City and was a founding member of the Limerick Pipers’ Club, where she teaches regularly. Maire has taught at several tionols in the US and Germany and has performed in such prestigious venues as the Willie Clancy Summer School’s piping concert and the William Kennedy Piping Festival. She plays a Koehler set and also a C Woof set.

Conal Ó Gráda has long been at the forefront of traditional Irish flute-playing and truly has one of its most distinctive sounds. A multiple All Ireland winner in his youth, Conal’s debut recording ‘The Top of Coom’ in 1990 is still regarded as a seminal recording of flute-playing. Conal teaches flute privately in his native Cork and is also a regular teacher at summer schools worldwide, including The Willie Clancy Summer School, Catskills Irish Arts Week and Blas. He is a co-founder of the flute band ‘Banna Fliúit Loch a’Bhogaigh’ and is chairman of Co. Corks’ annual traditional flute festival ‘Cruinniú na bhFliúit…the Flute Meeting’ He is a member of the band The band Raw Bar Collective, and 2012 published a book on flute technique and styles – An Fheadóg Mhór.

Alan Burton was born in the wilds of West Penwith in Cornwall. He has been playing Uilleann Pipes and making reeds for nearly 20 years. With an ever growing reputation as one of the few reedmakers who can just about breathe life into any old stick, his skills are recognised globally and many pipers all over the world can be found happily playing away with their ‘Burton’ reed. He has taught alongside Dave Hegarty at the Willie Clancy Summer School and has been resident reedmaking tutor for many years at SWAUPs and Tionols. Most recently, Alan demonstrated and taught ‘The Reeds’ at the recent Dave Williams Memorial Weekend.

Nick Scott is one of the UK’s finest exponents of the Uilleann pipes, touring extensively throughout Europe, the UK and the USA with top band ‘Last Night’s Fun’, as well as performing at the Edinburgh Tattoo and with Show of Hands at the Royal Albert Hall.