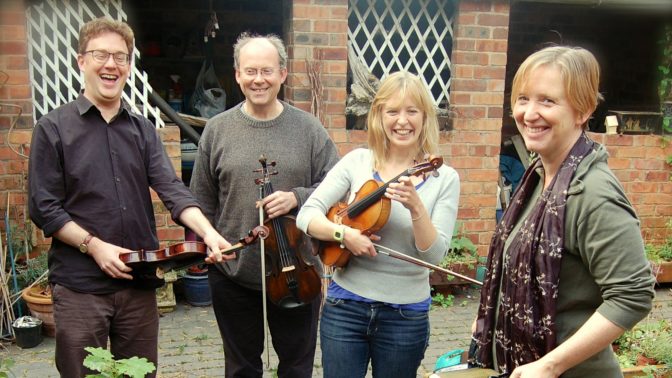 A stimulating and enjoyable weekend for dancers who want to learn more about the music and dances published by John Playford in the English Dancing Master in 1651. This is an intensive weekend of dancing, but there’s the option to take some free time on the Saturday afternoon. There will be a costume ball on the Saturday evening, so do bring costumes if you wish!

We’re delighted to welcome back the exciting and exemplary musicians Boldwood, who recently published ‘The Second Boldwood Dancing Master’, featuring 60 tunes researched by band member Matt Coatsworth, in addition to the 70 featured in their earlier publication.

The dance leader Bob Morgan brings knowledge, energy and enthusiasm to the weekend, helping you to get the most from your dancing.

This is an intensive weekend of dancing for regular dancers, but with the option of some free time on Saturday afternoon if you’re flagging! If you enjoy Playford dancing, want to understand more about its origins and put that into practice, then this course is for you.

Bob Morgan is passionate about all aspects of social dance and enjoys working with dancers at all levels. He is particularly keen on revisiting the “original” Playford dances from the early publishers and returning to the original sources with a modern eye. Bob aims to make all aspects of his calling accessible, fun and interesting.

Boldwood: Back in 18th century England, the worlds of folk and classical music happily co-existed and inspired each other to produce rich and fascinating instrumental music. This glorious period in our musical history provides Boldwood with the core of its repertoire. Much of their material is taken from little-known publications and hand-written manuscripts, all of which could end up sounding rather dry and academic – Boldwood, however, is anything but!

​All the members of Boldwood are classically trained, with an additional grounding in traditional music and, since much of this material was originally intended for dancing, they bring these neglected musical gems to life with a tremendous energy and drive. Their debut album, ‘Feet, Don’t Fail Me Now’, which was released in 2007 to great acclaim, includes many previously unrecorded tunes. The band was awarded Fatea magazine’s Tradition Award in 2008. A book of tunes collected by Becky and Matthew – ‘The Boldwood Dancing Master’ – was published in 2014. Some of these tunes appear on the group’s latest release, a six-track ep recorded live in 2015. In 2016, ‘The Second Boldwood Dancing Master’ was published by Blast Books.

Boldwood is well-known for leading workshops with musicians and dancers. The group was involved in the Playford Liberation Front project with Paul Hutchinson and Paul James, including weekends at Halsway Manor. They were the house band for the Halsway Playford Weekend in 2015. Members past and present appear in the current BBC television adaptation of Poldark.