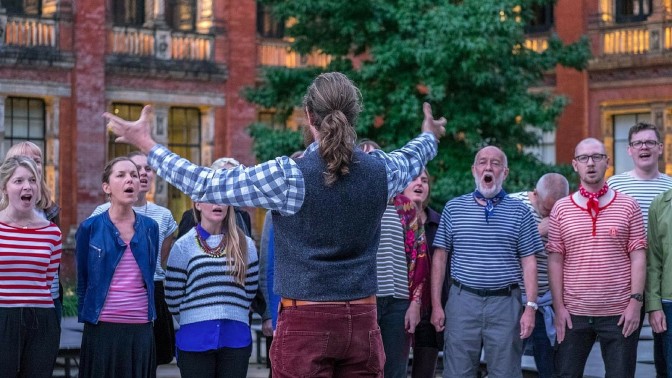 Join us at the Manor as we set sail to explore an exciting repertoire of maritime song.  Hosted by life-long sailor and musician Pete Truin, this will be a thrilling and invigorating weekend of singing.  Pete will be supported by a fantastic team of musicians and educators including Kate Locksley (The Teacups), Will Lang and Dr Catherine Tackley.

As well as singing local songs collected from Watchet sailor “Yankee Jack”, we’ll also examine how the trans-atlantic slave trade which emanated from Bristol changed work song cultures around the world.  After a trip to the quay at Watchet to visit the haunts of sailors of yesteryear, we’ll attempt to shed light on why the sea shanty has persisted and to give these powerfully rhythmic songs new relevance in the modern world.

This course is intended to be accessible to singers of all ages and abilities, and no ability to read music or previous experience of singing is required.  For the more vocally adventurous there will be plenty of opportunities to explore advanced vocal techniques, as well as singing some more challenging harmonies.

Pete Truin is renowned for his work as a singer, saxophonist, guitarist, arranger and educator.  Pete has performed at maritime music festivals in the UK and Europe with The Ballina Whalers, and also runs the Trad Academy Sea Shanty Choir.  His expertise in maritime music developed out of a passion for the sea, an interest in traditional song and a broad knowledge of the musical cultures of Northern Europe and the Americas.

Kate Locksley  is a singer of folk songs, broadsides, and other historical music, known for her harmony a capella arrangements. She is the alto(ish) in The Teacups, a vibrant vocal quartet based in Newcastle upon Tyne, where she studied Folk and Traditional Music as an undergraduate, and has recently completed a Masters degree based around the study of social protest in broadside ballads. Kate also performs with an all-female unaccompanied trio, Wychwood, and is the voice amongst the fiddle and guitar of Kev Lees and Dave Wood, in The Night Watch.

Will Lang is a modern British folk musician, composer and producer, who is a core tutor on Newcastle’s Folk and Traditional Music degree.  One of the most versatile musicians on the British folk scene today, he is particularly well known for his work as a percussionist and his choral compositions.

Dr Catherine Tackley is an Open University Lecturer who was a principal researcher on the Research Networking project “Atlantic Sounds: Ships and Sailortowns”.  She has carried out extensive research into 21st Century shanty singing, and has presented lectures and symposiums at some of Europe’s most prestigious maritime museums and festivals.