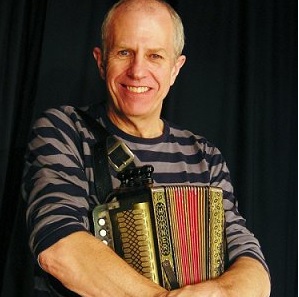 A packed weekend for all things melodeon! Workshops, informal sessions, an evening concert – and maybe a peek at the Melodeon Building course that’s running alongside!

John Kirkpatrick, one of England’s most prominent musicians and a master of the free-reed instrument, leads a workshop for players with some experience to get the most from the simple off the peg G/D melodeon. Using an English repertoire of dance tunes and songs, explore basic dance rhythms, how to get a lift into the music, and how to make your oom-pa’s into an orchestra. John will also have a look at accompanying songs with the melodeon if enough people are interested in that.

Ed Rennie will be running a parallel workshop for complete beginners, with instruments available to borrow for the weekend.

John’s course is for players – with some experience – who are interested in playing for various kinds of English dancing, and those wanting to explore what the melodeon can give tham in backing a song. The course is for players of the D/G melodeon. You’ll need to be able to play dance tunes up to speed.

Ed Rennie is running a parallel course specifically for total beginners (with instruments available to borrow for the weekend), and those making their first faltering forays into playing the D/G melodeon. Numbers are limited to 8 to ensure you get the attention and support that you you need.

John Kirkpatrick is one of the most prolific figures on the English folk scene, performing solo, in duos, acoustic groups and electric bands, and has established an enviable reputation as an instrumental virtuoso and session musician, as well as a leading interpreter of English folk music. He has been a member of the Albion Country Band, Magic Lantern, The Richard Thompson Band, Umps and Dumps, Steeleye Span, Brass Monkey, Trans-Europe Diatonique, and Band of Hope, as well as numerous ceilidh bands. As songwriter, composer, choreographer, and musical director, he has contributed to over sixty plays in the theatre and on radio. And as featured artiste, band member, or session player, his music can be heard on over 200 different commercial recordings.

A founder member of the Devon Squeezebox Foundation, Ed Rennie is passionate about helping people get started – and keep going! He recently published a book and CD ‘The Melodeon Tutor’, a step-by-step approach to unravel the mysteries of the D/G melodeon, and he runs beginners workshops at venues and festivals. For a long time best known as the melodeon player in The Bismarcks, Ed’s now building a parallel reputation as a fine singer too.

Full board per person (all meals, accommodation, workshops, concert):