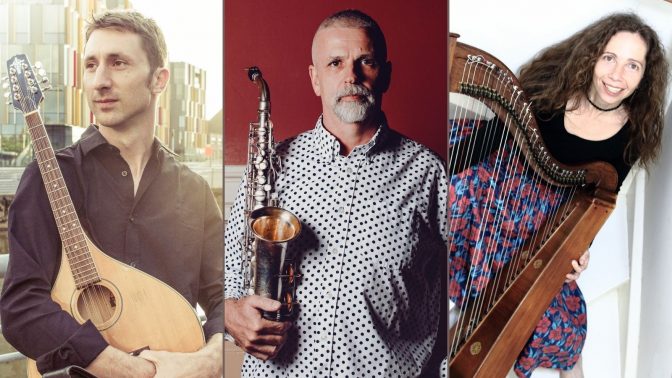 Please use the 'Book Now' button above to make a booking enquiry, or call 01984 618274 ext 1. Once you have made your booking and paid a deposit please complete the Participant Info Form, thank you!

We aim to keep our prices affordable to all. Prices for this weekend are slightly higher than other weekends in our programme due to the extended length of stay, the costs of bringing European artists to the UK, and also to support bursary places for musicians aged 18-25.

An extended weekend course for musicians to develop their ensemble playing skills. Drawing on European folk/contemporary/popular music traditions we’ll be making new arrangements that can go in any direction. The aim is to explore and combine all sorts of influences and ideas to make spine tingling music that is more than the sum of the parts.

The course is fairly intensive and includes all day ensemble workshop sessions with the aim of performing all the pieces we create together at a public concert on the Sunday night.

“It completely revived my creative juices – just what I needed.” 2019 Participant

The course is led by musician/composer/arranger Paul James (Blowzabella, Paul James and the Drowned Lovers). We are delighted to announce that Maarten Decombel (Snaarmaarwaar, MandolinMan and Naragonia Quartet) will join the team for 2022, plus the return of harpist, composer and teacher Merit Zloch (Zirla, Solid Ghost) for the second time.

Arrive at 12 noon Friday for lunch at 1pm; depart after lunch on Monday. A detailed programme will be sent out in advance.

The participants will be divided into two ensemble groups and each group will work with all 3 tutors throughout the course. There will be at least one piece of music that involves everyone playing together as one ensemble.

Saturday: Early morning guided walk in the Quantocks for those who want to. Breakfast 8:30am. Ensemble workshops 10am – 5:30pm. Lunch 1pm. Dinner 6:30pm. Evening trip to the award winning Pebbles Cider Tavern in Watchet or free time to relax.

Monday: Early morning guided walk in the Quantocks for those who want to. Breakfast 8:30am. Workshops 10am – 12:30. Lunch 1pm. Finish.

“The time was used really well. Productive, fun, achieved something, but with time to relax and get to know people!” 2019 Participant

This is an advanced level course suitable for advanced and advanced-intermediate musicians of ages 18 years and above, any instrument (acoustic, electric, ancient, modern) from any musical background (folk, jazz, rock, classical, early music). You’ll need to be able to read music or play well by ear. To get the most from this course you don’t need to be the greatest musician. You do need to be able to play confidently and be positive, flexible minded and a team player prepared to try things outside your comfort zone – and have the energy for quite long intensive days of music making.

“I’ve been to all three European Weekends, and each one just gets better!” 2019 Participant

If you play more than one instrument we advise you to bring it/them as this will help you to get the most from the course in terms of playing easily in different keys/modes, and also to be able to contribute in a way that is sympathetic to the style of the piece (panpipes don’t sound great on everything…). During the course we will provide any music manuscript you need including for any transposing instruments.  Please let us know your needs on the Participant Info Form – which must be completed once you have booked your place and paid a deposit.

You will be in safe hands with a very experienced tutor team in a mutually supportive atmosphere. We’ll have a lot of fun too with time for relaxation and informal music making.

“I’ve gained a bit more courage to be creative”. 2019 Participant

Bursary Places for Young Musicians: New for this year, we would like to hear from cash-strapped young musicians (we’re defining this as aged 18-25) who feel this course would be of particular benefit to them. We have a limited number of half-price dorm-room places available to successful applicants (£122.50). Interested? In the first instance please email Rachel Hill at Halsway Manor for an application form. Suitable applicants will be contacted by course leader Paul James for an informal phone / zoom interview. Places will be allocated to successful applicants on a first-come, first served basis, and are limited to a  maximum of 6 places.

Any queries about food, accommodation and how to get there, follow the Your Visit link above or phone 01984 618274 ext 1.

When you have booked and paid a deposit please tell us a bit about yourself and your musical needs (for example, music needed for transposing instruments) on the Participant Info Form.

“I particularly enjoyed playing with lots of talented musicians, inspired by three great tutors with different approaches. Met old friends, and made new ones”. 2019 Participant

Maarten Decombel played his first chords at the age of nine, discovered the folk guitar as a teenager and went on to study classical guitar at the conservatory with Yves Storms, alongside jazz guitar. His style can be described as a unique combination of pumping energy and subtle lyrique. He’s currently involved in Snaarmaarwaar, MandolinMan and Naragonia Quartet. Recently, he’s been working with Gilles Chabenat & Tondo, Jim Boyes and Ialma. His concerts have taken him all over Europe, also to Canada, China, Brazil and Japan. Maarten is often in demand as teacher of folk guitar and ensemble and he also teaches at the music academy of Deinze.

For our other European friends