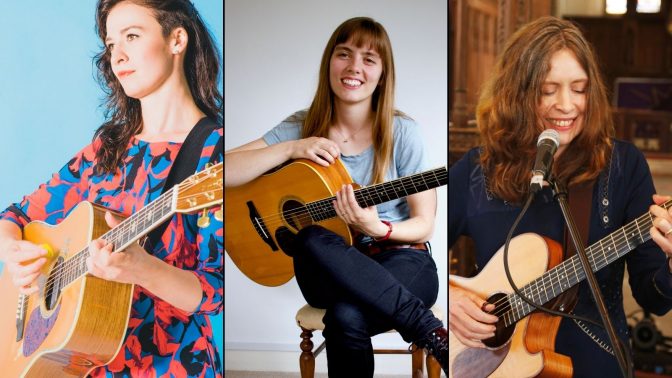 ***  THIS EVENT IS NEARLY FULLY BOOKED – ONLY CAMPING PITCHES AVAILABLE ****

We’re delighted to welcome Charlotte Carrivick, Jenn Butterworth and Sarah McQuaid as our super-talented trio to lead our fourth Guitar Workshop Week. The week is an intensive and enjoyable guitar-school week for steel-string acoustic guitarists, led by three fantastic and supportive tutors!

The week will help you to develop your skills and confidence, with options to explore finger style, flat-picking, alternative and open tunings, arranging tunes and song accompaniment, chord vocabulary, and useful theory too. Whole group, smaller group and a little one-to-one teaching should time allow, to leave you enthused and inspired! There will be down-time too, for you to practise, jam, socialise and spend quality time with your instrument. Plus an informal tutor concert, and opportunities for you to share your own performances if you choose.

The tutor team bring with them a wealth of knowledge and experience embracing a variety of styles, the idea being you’ll spend a day working with each of the tutors. We’ll complete an outline of what each tutor plans to offer shortly.

Charlotte’s Workshop: Charlotte will cover the basics of flatpicking for both lead and rhythm playing, working up towards creating more intricate solos and interesting backup. We will be learning how to make fiddle tunes sound great on the guitar and how to make them your own. As a style with a big focus on improvisation, we’ll be looking at ways to expand your knowledge of the fretboard and open up different pathways on the guitar. (For guitar in standard tuning, this course requires a plectrum).

Sarah’s Workshop: Sarah’s workshop will focus on the DADGAD tuning, beginning with an overview of basic DADGAD chord shapes, the capo and its uses, and the various modes (Mixolydian, Dorian, etc.) that are particularly suited to this tuning. We’ll then take a more in-depth look at song accompaniment, and particularly on using DADGAD to play in other keys besides the obvious D, as well as on the applicability of DADGAD to a multitude of styles from traditional Irish and American music to blues, jazz and contemporary originals. Handouts with lyrics, tablature and chord diagrams for songs in various keys and styles will be provided.

This course is aimed at acoustic guitarists (steel-strung) of an intermediate level and above, it’s not really suitable for beginners.

As a guide, to get the most from the course you’ll need a grasp of the following topics:

Beyond this, enthusiasm is much more important than skill level; we only ask that you join in to the best of your ability. This week is all about helping you develop your playing, whatever your current level of ability, and sending you away with the inspiration and tools to continue to improve.

Jenn Butterworth: Scots Trad Music Awards ‘Musician of the Year’ winner and BBC Radio 2 Folk Awards ‘Musician of the Year’ nominee, Jenn Butterworth is one of the most notable folk guitarists in the UK acoustic music scene. An excellent collaborator, she has been a key member of a range of high profile folk music projects, including Ross Ainslie and Ali Hutton’s SYMBIOSIS Big Band, award winning folk powerhouse Kinnaris Quintet, three Celtic Connections New Voices, four years on the BBC Hogmanay Live show as a member of the All Star House Band and as a member of folk supergroup ‘Songs of Separation’ involving an array of prominent folk artists including Eliza Carthy, Lady Maisery and KarinePolwart. The Songs of Separation album, conceived, arranged and recorded in just 7 days, won the title of ‘Best Album’ at the Radio 2 Folk Awards in 2017.

Based in Glasgow, Jenn is a lynchpin of the vibrant and thriving Scottish folk scene, performing regularly with a wide range of artists including her own projects ‘Jenn Butterworth & Laura-Beth Salter’, ‘Kinnaris Quintet’ and experimental folk-jam group ‘The Blas Collective’. In recent years she has performed on a host of award winning and nominated studio albums, including Kinnaris Quintet’s ‘Free One’, which was longlisted for Scottish Album of the Year in 2019. In the same year, Kinnaris Quintet won the coveted ‘Belhaven Award for Innovation in Traditional Music’. Jenn works as regular accompanist for acclaimed fiddle player Ryan Young; they were nominated for Folk Band of the Year at the Scots Trad Music Awards in 2018,and are the only UK act to have been selected to perform at Womex 2019 in Tampere, Finland.

Jenn is also a highly recognised teacher with a wide range of teaching experience, and was awarded ‘Tutor of the Year’ at the 2015 Scots Trad Music Awards. She is Lecturer in Practical Studies in the Traditional Music Department of the Royal Conservatoire of Scotland, is a regular member of the teaching staff for Glasgow Fiddle Workshop and has recently taught for Fèisean nan Gàidheal, the National Youth Folk Ensemble (EFDSS), Halsway Manor & Burg Fürsteneck (Germany).

Charlotte Carrivick is one of the top female flatpicking guitarists in the world with an inventive lead style and solid rhythm playing. As one of the UK’s most sought after bluegrass and old time musicians, Charlotte is an experienced and award winning musician and teacher. As a multi instrumentalist, singer, songwriter and composer she regularly performs internationally with The Carrivick Sisters, Midnight Skyracer, Cardboard Fox and in a duo with fiddler, Kieran Towers. Charlotte has performed on BBC Radio 4‘s Woman’s Hour, BBC One‘s The One Show playing banjo with Tom Jones as well has having airplay on BBC Radio 2 on several occasions. www.charlottecarrivick.co.uk/

Sarah McQuaid – Award-winning musicianship, distinctive chocolatey vocals and mastery of the songwriting craft have led reviewers to describe Sarah McQuaid as a “triple threat”. Add to that a warm, charismatic stage presence, five critically acclaimed solo albums and a battery of instruments including acoustic and electric guitars, drum and piano — and you’ve got a one-woman powerhouse who defies categorisation because there simply isn’t anyone else out there quite like her.

Born in Madrid (to a Spanish father and an American mother), raised in Chicago and now living in rural England (having also lived in Ireland for 13 years), Sarah’s music and original songwriting draws on broad influences of traditional music and song, from Ireland, the UK, the USA and beyond.

In April 2017, Sarah was presented with a Lifetime Achievement Award by the Ards International Guitar Festival in Newtownards, Northern Ireland (previous recipients include legendary guitarists Davey Graham, John Renbourn, John Martyn, Martin Simpson, Pierre Bensusan and Martin Carthy) in recognition of her innovative use of the DADGAD tuning and her authorship of The Irish DADGAD Guitar Book (Ossian/Music Sales Inc, 1995). She regularly presents workshops on the DADGAD tuning (as well as on songwriting, tour booking and more) at festivals, music schools and venues around the globe, and is working on a follow-up book on DADGAD song accompaniment.