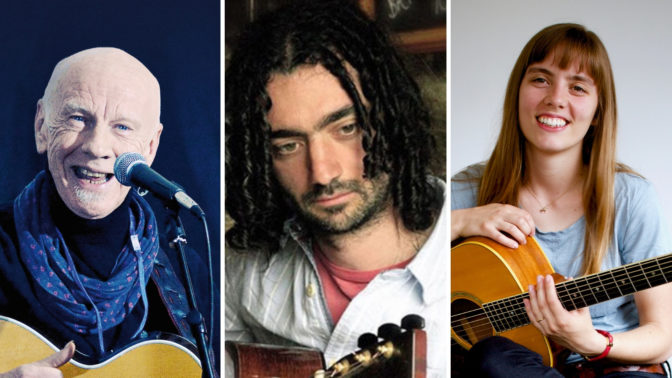 Kevin Dempsey is an unassuming sort of bloke, whose quiet manner and laid back attitude hide a multitude of extraordinary talents as guitarist, singer songwriter, composer, arranger and producer. His wide experience shows in his versatility and ability to turn his hand, and guitar, to many different styles and genres and, for a long time, he has been sought out by other musicians. www.kevindempsey.eu

“Kevin Dempsey is a master of tricky rhythms and effortlessly complicated guitar parts and spreads a wonderfully dignified calm through the turbulent and muddied waters of my outpourings.” – John Kirkpatrick

Tristan Seume is acclaimed as one of the UK’s leading acoustic guitarists, and has toured all over Europe both as a soloist and a sought-after accompanist. His two solo albums, You Just Know and Middle Child mix handcrafted originals with beautiful interpretations of traditional and contemporary tunes. He performs regularly with BBC Radio 2 Folk Award-winning artist Jackie Oates, and has recorded and played with many other artists on the UK folk scene. www.tristanseume.co.uk

“Seume’s superb fingerpicking talent, and ease of drifting between styles drives you to a state of listening compulsion” – Acoustic Magazine

Charlotte Carrivick is one of the top female flatpicking guitarists in the world with an inventive lead style and solid rhythm playing. As one of the UK’s most sought after bluegrass and old time musicians, Charlotte is an experienced and award winning musician and teacher. As a multi instrumentalist, singer, songwriter and composer she regularly performs internationally with The Carrivick Sisters, Midnight Skyracer, Cardboard Fox and in a duo with fiddler, Kieran Towers. Charlotte has performed on BBC Radio 4‘s Woman’s Hour, BBC One‘s The One Show playing banjo with Tom Jones as well has having airplay on BBC Radio 2 on several occasions. www.guitarmandolinbanjo.co.uk