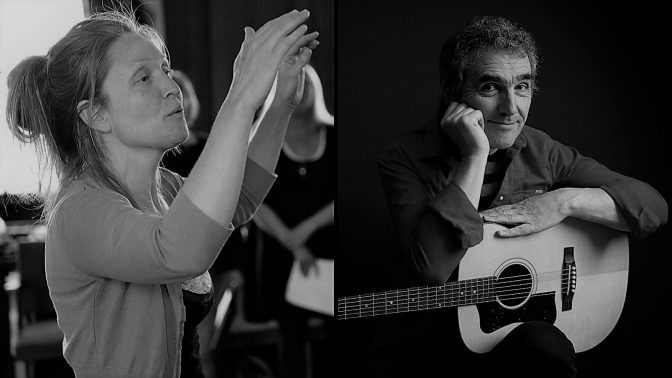 As part of the Give Voice weekend, we’re delighted that the all-singing team that includes Emily Longhurst and Jez Lowe will be doing a public performance.

Give Voice is hosted by Tom & Barbara Brown: Grounded in the living tradition of singing in the West Country, these two have a long history of encouraging and enthusing amateur and new performers to share songs and singing, and creating a relaxed and friendly atmosphere in which to do it.

Emily Longhurst  is a singer and Natural Voice coach. She is a teacher of English Folk Song, particularly those collected in Sussex, where she leads the South Downs Folk Singers, and her passion for sea shanties led to the formation of the Secret Shore Singers.

Jez Lowe (The Bad Pennie, The Pitmen Poets, The Broonzies, Men at Words) is well known in the UK folk and acoustic music scene and his songs widely sung by performers including Fairport Convention, The Dubliners, The Unthanks and The Young Uns. He received a double nomination in the 2015 BBC Folk Awards – for best singer and best new song. His song The Wrong Bus featured in Radio 4’s Pick of the Year last year. His last solo album, The Ballad Beyond received a feature and glowing reviews in fRoots magazine. Jez is musical director for Badapple Theatre, and a published author – his novel, The Dillen Doll, with an accompanying CD featuring a “suite” of traditional songs inspired by the story within it, was met with widespread acclaim. Jez continues to tour with fellow-singer/songwriter Steve Tilston with a series of UK concerts scheduled for 2020.