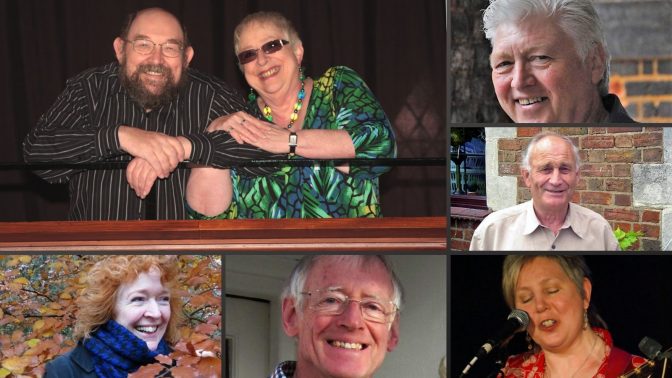 Building on the success of their annual Give Voice Weekends we’re delighted that Tom and Barbara Brown have agreed to host a relaxed week of Folk Song and Singing with a great all-singing team.

Singers of all ages (teenagers to pensioners) and abilities are welcome to join the fun, in the comfortable and relaxed surroundings of Halsway Manor. The programme includes practical workshops, presentations, a film screening, discussions, song sharing and Big Sings (with everyone having a chance to lead chorus songs – if they want to) when the bar is open.

There will be plenty of opportunity to explore songs and individual singing in between, or have a ramble around the glorious countryside – it’s up to you! You’re welcome to bring accompanying instruments if you wish. The extensive folk library will also be open throughout the weekend should you wish to delve into the collection.

The week includes a twilight ‘Leaders’ Concert’ on the Wednesday evening.

This is a friendly week of workshops for singers of all ages  and abilities to enjoy and explore traditional song in a convivial and supportive atmosphere. There will also be opportunities to learn how to look after and improve your voice and performance.

“Camaraderie, support, inclusive, non-judgmental, helpful. The attendees and the tutors were wonderful people all intent on getting the most from the weekend.” Participant

Bonny Sartin: Bonny, the voice of The Yetties, has years of experience in singing and entertaining an audience. There is little he cannot impart about confidence, presentation, and approaches to songs and singing – but his knowledge extends way beyond that – to song collectors, square riggers and Halsway ghosts!

Janet Russell: As well as being a member of the renowned Sisters Unlimited and JigJawand, of course, her solo career, Janet also runs not one, but three community choirs, so she knows what she’s talking about when it comes to the voice!

Jim Mageean: Widely known and respected internationally as ‘Shanty Jim’, his knowledge and skill goes far beyond shanties and maritime songs – into songs of the North East and singing with other performers. Jim has also been a tutor on the Folk Music degree course at Newcastle University.

Marianne McAleer: A delightful London-Irish singer and interpreter of traditional Irish song, Marianne’s enthusiasm in infectious. She is a multi-award winner at the All-Britain and All-Ireland Fleadh Cheoil and is now a judge for singing and traditional style.

Jeff Wesley: Jeff is what has become known as a ‘source singer’. A retired Northamptonshire farmer, Jeff’s repertoire runs from the sublime to the ridiculous – from old ballads to modern ditties. He gleans any song that appeals to him, irrespective of origin, and makes the song his own with a laid-back and captivating style!