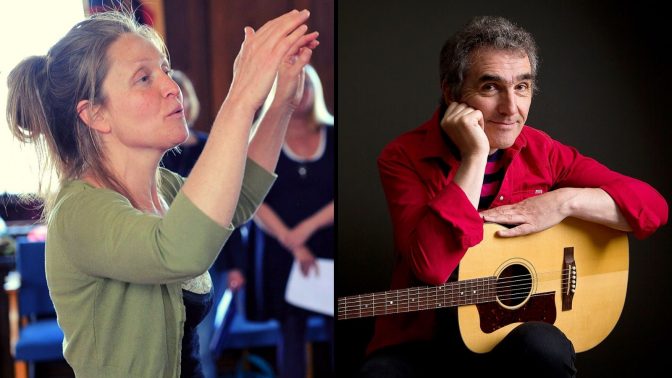 A weekend of song-sharing and workshops with Tom & Barbara Brown, and guest leaders  Emily Longhurst and Jez Lowe!

Singers of all ages (teenagers to pensioners) and abilities are welcome to join the fun, in the comfortable and relaxed surroundings of Halsway Manor. Big Sings (with everyone having a chance to lead chorus songs – if they want to) when the bar is open, and opportunities to explore songs and individual singing in between, learn how to look after your voice and performance, or have a ramble around the glorious countryside – it’s up to you! You’re welcome to bring accompanying instruments if you wish. The extensive folk library will also be open throughout the weekend should you wish to delve into the collection.

The weekend concludes after a twilight ‘Leaders’ Concert’ on the Sunday evening, and optional supper, B&B is available should you wish to stay on for Sunday night’s survivors’ session.

This is a friendly weekend is for singers of all ages  and abilities to enjoy and explore traditional song in a convivial and supportive atmosphere, with opportunities to learn how to look after and improve your voice and performance.

“Camaraderie, support, inclusive, non-judgemental, helpful. The attendees and the tutors were wonderful people all intent on getting the most from the weekend.” Participant

Emily Longhurst  is a singer and Natural Voice coach. She is a teacher of English Folk Song, particularly those collected in Sussex, where she leads the South Downs Folk Singers, and her passion for sea shanties led to the formation of the Secret Shore Singers.

Jez Lowe (The Bad Pennie, The Pitmen Poets, The Broonzies, Men at Words) is well known in the UK folk and acoustic music scene and his songs widely sung by performers including Fairport Convention, The Dubliners, The Unthanks and The Young Uns. He received a double nomination in the 2015 BBC Folk Awards – for best singer and best new song. His song The Wrong Bus featured in Radio 4’s Pick of the Year last year. His last solo album, The Ballad Beyond received a feature and glowing reviews in fRoots magazine. Jez is musical director for Badapple Theatre, and a published author – his novel, The Dillen Doll, with an accompanying CD featuring a “suite” of traditional songs inspired by the story within it, was met with widespread acclaim. Jez continues to tour with fellow-singer/songwriter Steve Tilston with a series of UK concerts scheduled for 2020.