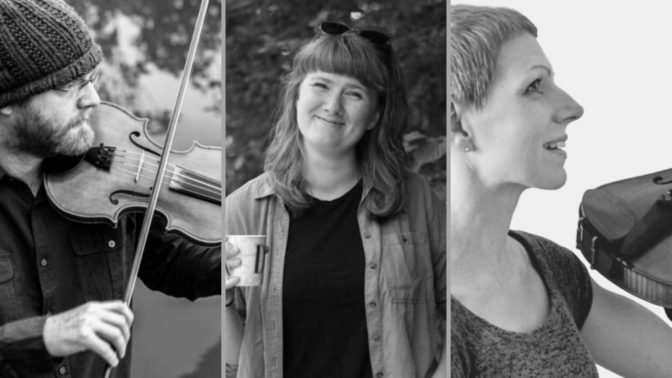 Rowan Rheingans is an award-winning fiddle player, banjoist, songwriter and theatre-maker widely regarded as one of the foremost innovators in folk music today. Best known for her work with acclaimed bands Lady Maisery, The Rheingans Sisters and Songs of Separation, Rowan has won two BBC Radio 2 Folk Awards (‘Best Original Track’ in 2016 & ‘Best Album’ in 2017) and is a six-times nominee. Her duo The Rheingans Sisters were recent nominees for the prestigious ‘Best Duo/Band’ award at the 2019 BBC Radio 2 Folk Awards.

“When I am working with fiddle players, my aim is to establish their unique playing goals, musical interests and technique curiosities and work with them thematically with material from various fiddle traditions to develop their playing and general musicality. I teach by ear and spend a lot of time working with bowing technique, intonation, rhythm and the internal grooves of tunes (and how to play them), bringing a tune to life and finding solo variations, developing a personal toolkit for improvisation and playfulness within any musical style as well as in the specific styles of folk fiddle music that I’m most experienced in, including Swedish, English and French traditional repertoire.”

Rowan’s debut theatre show ‘Dispatches on the Red Dress’, co-written with Liam Hurley, premiered at this years Edinburgh Fringe and won a Fringe First Award as well as nominations for the Carol Tambor ‘Best of Edinburgh’ Award and the Filipa Braganca Award for Best Emerging Female Artist.

Becki Driscoll is a musician, singer, composer and educator with many years’ experience. Based in the heart of the West Country she has a deep knowledge on love of our local – and wider – folk traditions.

As a performer Becki is well known for her celebrated musical partnership with Nick Wyke; two of the UK’s finest fiddle-players, together they give a playful and innovative take on English traditional music and song. They first collaborated as a fiddle duo on a busking trip around Spain and Portugal, and in the years since have worked with some of the leading lights of the English folk scene, always pushing the boundaries and developing new and inventive music. The duo’s compositions and interpretations of traditional songs are influenced by a wide range of musical cultures: “We are inspired by the people we meet and the places we’ve been. We like the idea of a global approach to the English tradition.”

Becki leads educational projects and workshops for festivals and specialist courses, ranging from beginners fiddle sessions, to mixed-instrument folk ensembles. She leads the prestigious English Fiddle Weekend at Halsway (together with Nick Wyke), and runs RootNotes, a community music company that provides participatory music workshops for people of all ages in North Devon, including a weekly folk ensemble (featured on BBC Spotlight!) and regular music sessions for young people and families. ​Becki firmly believes that music is something that anyone can enjoy and everyone can take part in. Music brings people together. The shared experience of playing and singing in a group setting is a wonderful way of building confidence, well-being and friendship.