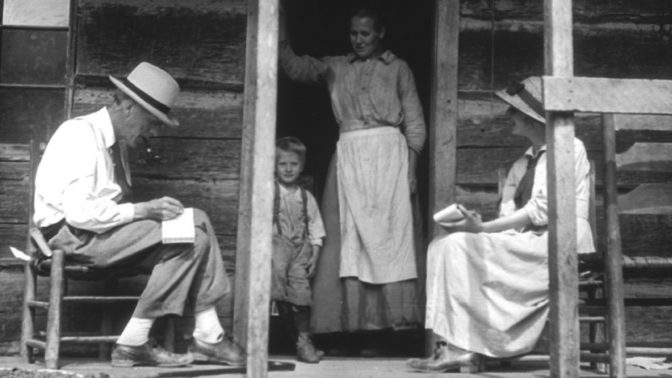 Halsway is delighted to welcome two outstanding American musicians for our first weekend on Appalachian music. Anna Roberts-Gevalt, singer, fiddle and banjo player with the sensational duo Anna & Elizabeth, will be joined by Jeff Warner, one of the most respected and entertaining performers of traditional song in the USA.  They are joined by workshop co-ordinator, singer and multi-instrumentalist Brian Peters for a course exploring Appalachian balladry and music, and the links with the Old Country, to celebrate the centenary of Cecil Sharp and Maud Karpeles’ songhunting expeditions to the mountains.  Our tutors will offer a wide range of workshops, and there will be plenty of opportunities to participate.  In addition, Brian will present his acclaimed multimedia show ‘Sharp’s Appalachian Harvest’, Jeff will give an illustrated talk on his parents Frank and Ann Warner’s song collecting adventures, and Anna, Jeff and Brian will appear in concert together.

The weekend is aimed mainly at singers and singer / instrumentalists.  On offer will be classes exploring the mountain ballad tradition and other types of old-time song, clawhammer banjo for song accompaniment, Kentucky fiddle tunes, ‘crankies’ (ballad tales in pictures), and classic archive recordings. There will also be chances for participants to learn material or sing and jam with our guests, and the weekend will be rounded off with a gospel sing.

The weekend is aimed at singers and singer / instrumentalists with an interest in Appalachian song and / or song migration. Singers of all levels of experience are welcome, musicians will need to have a good grasp of their instrument to make the most of the workshops (not recommended for beginners). We’ll publish a programme soon showing workshop options to give you a clearer idea of what to expect.

“Not only a top-notch singer and player, but also one of the best-researched performers currently doing the rounds… a master of his several crafts” Gordon Potter, The Living Tradition

Jeff Warner is among the US’s foremost performer/interpreters of traditional music. His songs from the lumber camps, fishing villages and mountain tops of America connect 21st century audiences with the everyday lives–and artistry–of 19th century Americans. Jeff grew up listening to the songs and stories of his father Frank Warner and the traditional singers his parents met during their folksong collecting trips through rural America. He accompanied his parents on their later field trips and is the editor of his mother’s book, Traditional American Folk Songs: From the Anne and Frank Warner Collection. Jeff has performed widely, including large festivals in the UK as well as clubs, festivals and schools across America. He plays concertina, banjo, guitar and several “pocket” instruments, including bones and spoons. Jeff is a founding officer of Folk Alliance International, a producer of the Portsmouth (NH) Maritime Folk Festival and past president of the Country Dance and Song Society. In 2016, CDSS honored Jeff’s dedication to the world of traditional folk music with their annual Lifetime Contribution Award.

“Providing more than just rich entertainment, Jeff will leave you with a deeper appreciation of the land you live in” Caffé Lena, Saratoga, NY

She is lauded for her work with the duo Anna & Elizabeth; what began in 2011 as two artists sharing a love of Appalachian music has evolved into a visionary project that utilizes visual art, movement, and experimental film. Through their immersive creative process and bold interpretations, Anna & Elizabeth are pioneering new ways of understanding old songs and stories.

She says, of mountain music:
“this old music is INCONCEIVABLY RICH. woven into the thread of a deep and troubled and exquisite culture & history. i try to do my best to learn it honestly, and share it with grace, in all its fullness. and somehow, to stumble into the future with new ideas and experiments.”

Anna fell in love with the sound of banjo in college, moved to the mountains, and learned with master musicians in Kentucky, Virginia, and North Carolina. She has been a fellow at the Berea College Traditional Music Archive and OneBeat (Bang on a Can’s Found Sound Nation); three years artistic director of Kentucky’s traditional music institute, the Cowan Creek Mountain Music School; and co-curator of Baltimore’s Crankie Festival. She is a summer 2017 fellow at National Sawdust in Brooklyn, and recently studied in a workshop with Meredith Monk.