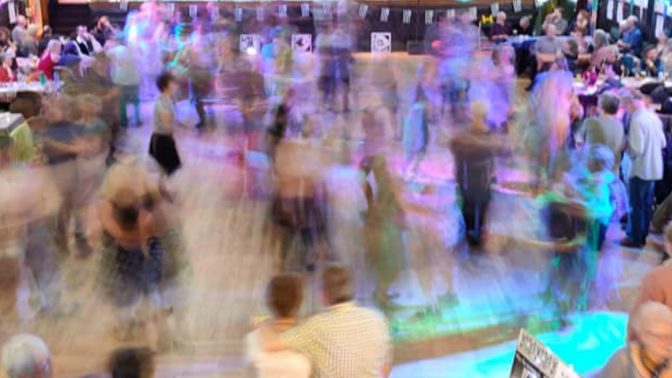 Discover French dance or develop your dance horizons! Both experienced and novice French dancers are invited to a week of expert tuition led by Peter Clifton, and supported by Karen Prager.  The course will be taught to exemplary live music from Richard Heacock (violin) and Paul Hutchinson (accordion), and David Faulkner (pipes). Yannick Minvielle-Debat will join the team for part of the week to introduce traditional singing-for-dancing.

Dancers will be introduced to French couple dances: Schottishe, Bourrée, Waltz and Mazurka, and to Breton circle and chain dances. (You don’t need to bring a partner for the couple dances). Lesser-known dances will also be taught, including some from the Vendée and Poitou regions. The focus will be on dance variation and developing communication and dynamics through both couple and circle dances.

Yannick will add some easy-to-learn French songs to the mix, which can be applied to well-known dances, and practised within the week at workshops and evening bals.

Dancers who also play are encouraged bring to bring instruments if they wish; there will be opportunities to play for some of the dances in the bal each evening. The week will end with a public Bal on Thursday night, when we’ll be joined by guest musician Dave Faulkner (Eel Grinders) and guitarist Chris Green.

David Faulkner has been playing pipes for over 25 years with groups such as the Eel Grinders and Jon Swayne’s Zephyrus, and performs regularly as a duet with accordionist Steve Turner. He is highly experienced in playing for both English and French dance traditions, and also calls for and leads workshops in traditional French dance. He has toured in Europe, Canada and America. He works extensively as a music educator, and has led many pipe courses in the UK (including Halsway) and abroad as well as working as a community musician for nearly 20 years.

Chris Green (Guitar) is one half of Green-Matthews. Chris began playing guitar at the age of eight and plays most things with fretted strings or keys. Largely self-taught, he’s worked in a variety of musical genres including folk, theatre and early music. He’s a regular musician at Shakespeare’s Globe and one of the musicians on BBC’s Poldark series. He is a writer and composer having adapted The Wind in the Willows (2017) for GreenMatthews as well as A Christmas Carol: In Concert (2018). He has also recently released his first solo album Switched-On Playford, which fuses 17th-century dance music with electronica, using a blend of early instruments, synths and loops. He’s also working on a new live score for the 1922 silent film Nosferatu. www.chrisgreenmusic.co.uk