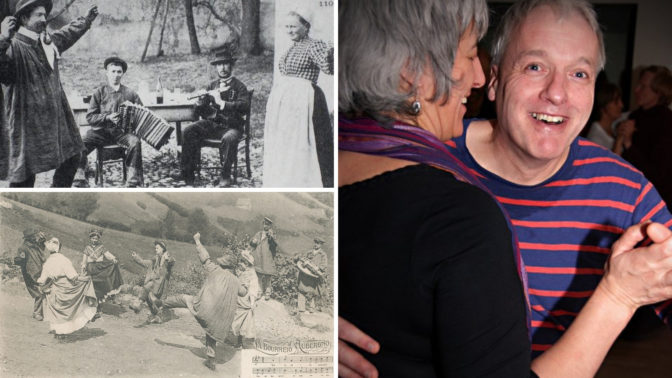 Discover French dance or develop your dance horizons! Both experienced and novice French dancers are invited to a week of expert tuition led by Peter Clifton, and supported by Karen Prager. Christine Planel will join the week to add a singing-for-dancing session or two, with music throughout from Paul Hutchinson and Richard Heacock.

Dancers will be introduced to French couple dances: Scottish, Bourrée, Waltz and Mazurka, and to Breton circle and chain dances. (You don’t need to bring a partner for the couple dances). Lesser-known dances will also be taught, including some from the Vendée and Poitou regions. The focus will be on dance variation and developing communication and dynamics through both couple and circle dances.

Christine will add some easy-to-learn French songs to the mix, which can be applied to well-known dances, and practised during the week at workshops and evening bals. Dancers who also play are encouraged bring to bring instruments if they wish; there will be opportunities to play for some of the dances in the bal each evening. the week will end with a public Bal on Thursday night.

Christine Planel was brought up in France in a family whose roots are solidly set in Brittany & the Auvergne. She has enjoyed a career in teaching (students & adults in particular) using methods based on acquiring & communicating language skills rather than dry knowledge; enthusiasm & energy are uppermost in her approach.

She has a life-long passion as a singer and a dancer in the French folk dancing tradition. She has been playing & singing for dancing with a Devon-based band for over 10 years for dance groups, twinning organisations and local gigs. She regularly attends French dance festivals & workshops in all areas of France, and joined a French band in Brittany last year as a singer

Christine has contributed to the French & Breton Dance Week at Halsway Manor for the last 2 years, teaching easy-to-learn French songs that can be applied to well-known dances, and practiced during the week at workshops and evening bals.

Paul Hutchinson is a member of the much-loved duo Belshazzar’s Feast (nominated for Best Duo at the BBC Folk Awards in 2010) and fusion duo Pagoda Project. Regarded as one of the top accordionists in the UK, Paul is the resident accordion tutor at Cecil Sharp House, and a regular tutor and musician at Halsway Manor. Paul is much in demand as a player for dancing which has resulted in appearances at festivals in the UK, Europe and the USA.