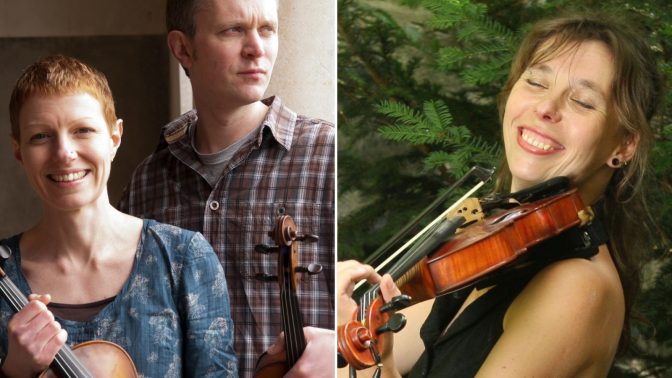 North Devon duo Nick Wyke & Becki Driscoll share a love of traditional English fiddle music and also compose their own tunes. We are delighted to be welcoming Vivien Zeller, an extraordinarily talented musician and teacher from Germany, to join them as our guest tutor for 2020!

On Saturday evening there’s a chance to watch the tutors in action in a public performance at 8pm.

Nick Wyke & Becki Driscoll first collaborated on a busking trip around Spain and Portugal. Since then, they have made a strong impact on the British folk scene and received national and international acclaim. The duo’s compositions and their interpretations of traditional English tunes and songs are influenced by a wide range of musical cultures: “We are inspired by the people we meet and the places we’ve been.” Their style is unique; Becki’s melodic, emotive violin and viola blends with Nick’s driving fiddle chords and powerful vocals to create a rich, captivating sound. As well as performing, Nick & Becki’s work varies from recording symphonic string arrangements for the Angel Brothers to running community group ‘The Folk Orchestra of North Devon’ for Wren Music.
Vivien Zeller is a professional musician, instrumental and dance teacher from Berlin. She began playing violin at the age of 5, also studying piano, guitar, singing and dancing from an early age.

“After 13 years of classical education, I discovered traditional dance music at the age of 17 and found what I had been looking for a long time. Connectedness of music, dance and variation. To breathe life into these beautiful old melodies, to make them groove and to feel the connection to the dancers still fascinates me.”

Though most at home with the music of German traditions, Vivien is always on the lookout for inspiration and perfection, travelling across Europe to learn different traditional and new playing techniques on courses, concerts and sessions that can enrich and develop her game.

As well as her work as a musician and teacher, Vivien is co-organizer of the Klangrauschtreffen festival, organises courses on traditional music and improvisation, runs the youtube channel  “TradTanzMusik” for the dissemination of traditional dance music in German-speaking countries and co-supervises www.tanzmusikarchiv.de