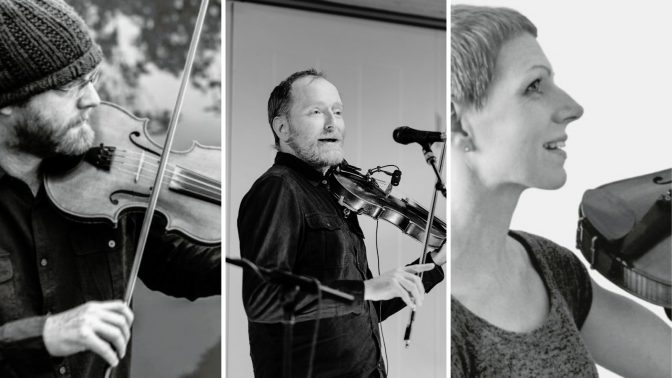 In a change to the original line up Ben Paley is replacing Rowan Rheingans as this year’s co-tutor on Fiddle Weekend. So we are delighted he will perform with Tom Kitching and Becki Driscoll tonight.

Ben Paley is both an exceptional performer and teacher of traditional fiddle music and song.
He has been surrounded by traditional music since birth – his father (Tom Paley, a great figure of the American folk revival), mother (singer Claudia Gould) and step-father (Ron Gould, writer on jazz, country and folk music). Ben began playing the fiddle at the age of 6 and cut his teeth in North Carolina USA learning harmony, improvisation, and playing with others, studying with renowned Nashville session musician Jim Buchanan (who’s played with everyone from Jim & Jesse to The Doors). His influences are diverse, aside from forays into Irish music and punk Ben has also authored “Swedish Fiddle Music: An Anthology” now in its second edition.

His current projects include The Long Hill Ramblers alongside Laura Hockenhull and Dan Stewart, English folk supergroup The Servants’ Ball; the New Deal String Band with Joe Locker and Sara Grey; with Belfast-born singer-songwriter Dan Donnelly; and in English dance band The Sussex Pistols, amongst other things.

Becki Driscoll is a musician, singer, composer and educator with many years’ experience. Based in the heart of the West Country she has a deep knowledge on love of our local – and wider – folk traditions.

As a performer Becki is well known for her celebrated musical partnership with Nick Wyke; two of the UK’s finest fiddle-players, together they give a playful and innovative take on English traditional music and song. They first collaborated as a fiddle duo on a busking trip around Spain and Portugal, and in the years since have worked with some of the leading lights of the English folk scene, always pushing the boundaries and developing new and inventive music. The duo’s compositions and interpretations of traditional songs are influenced by a wide range of musical cultures: “We are inspired by the people we meet and the places we’ve been. We like the idea of a global approach to the English tradition.”

Becki leads educational projects and workshops for festivals and specialist courses, ranging from beginners fiddle sessions, to mixed-instrument folk ensembles. She leads the prestigious English Fiddle Weekend at Halsway (together with Nick Wyke), and runs RootNotes, a community music company that provides participatory music workshops for people of all ages in North Devon, including a weekly folk ensemble (featured on BBC Spotlight!) and regular music sessions for young people and families. ​Becki firmly believes that music is something that anyone can enjoy and everyone can take part in. Music brings people together. The shared experience of playing and singing in a group setting is a wonderful way of building confidence, well-being and friendship.