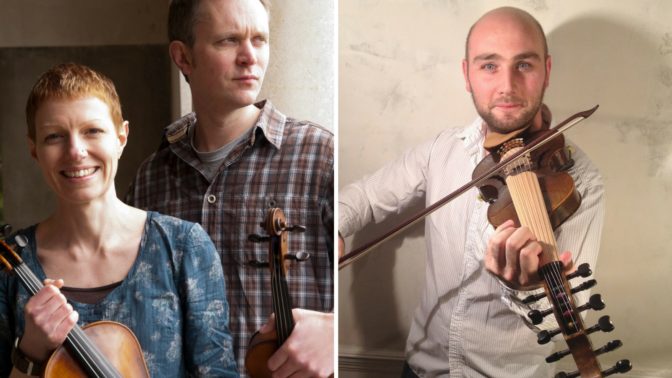 An informal evening of music from our English Fiddle Weekend tutors: Nick Wyke, Becki Driscoll and John Dipper.
Nick Wyke & Becki Driscoll first collaborated on a busking trip around Spain and Portugal. Since then, they have made a strong impact on the British folk scene and received national and international acclaim. The duo’s compositions and their interpretations of traditional English tunes and songs are influenced by a wide range of musical cultures: “We are inspired by the people we meet and the places we’ve been.” Their style is unique; Becki’s melodic, emotive violin and viola blends with Nick’s driving fiddle chords and powerful vocals to create a rich, captivating sound. As well as performing, Nick & Becki’s work varies from recording symphonic string arrangements for the Angel Brothers to running community group ‘The Folk Orchestra of North Devon’ for Wren Music.
John Dipper is a respected and established performer, composer, teacher and instrument maker. John grew up steeped in the traditions of Southern England, and his unique playing style and compositions convey a deep understanding and passion for indigenous culture.As an experienced workshop leader and teacher, John’s knowledge, experience and enthusiasm combine to make him a much sought-after tutor in academic institutions, festivals and music-camps and academies. He has taught at venues and events including the Australian National Festival, Sidmouth Festival, Ashokan, Goldsmiths University and regularly teaches on the Folk Music degree course at Newcastle University and the World Irish Music MA Course at Limerick University. John’s passion for vernacular music led to his degree dissertation focussing on the interpretation of field recordings, looking at intonation, tuning and expression.

John has recorded on several films including the Hobbit, and currently performs with the groundbreaking string quartet Methera, in a duo with superb singer and guitarist James Patterson, as well as performing in the English Acoustic Collective, and with Dave Malkin in the duo Dipper Malkin, in the trio Alma, and in the Emily Askew Band. He also works with renowned storytellers Hugh Lupton and Nick Hennessey. John has also taken part in many international collaborations with artists from Sweden, Quebec, France, Ireland, America, Hong kong, China, The Gambia and Finland.

“I think John is in a league of his own, an amazing musician, composer and player. When I hear John play, I hear the sound of England. The depth he manages to achieve. The lack of clutter. Every note he puts together, nothing in there detracts from what he is trying to achieve. He’s an astonishing player. If we lived in Japan he’d be a national treasure already. He’d be paid by the State to just do what he does. He’s a very special player. I find his music incredibly moving. For me, it’s the sound of England.”  Chris Wood, fROOTS Magazine