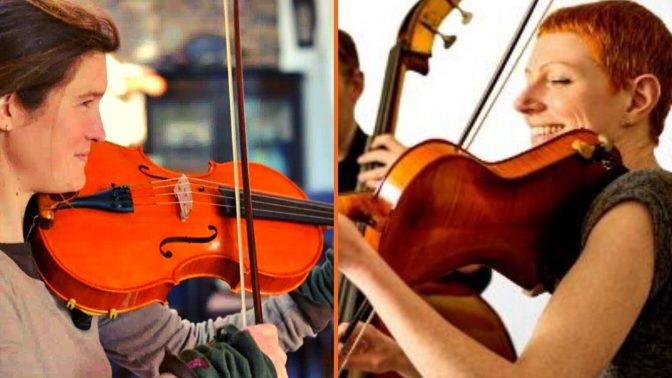 We will allocate rooms on a first come, first served basis so please book early for your choice of accommodation

Join Becki Driscoll and Miranda Rutter for an intensive day of rehearsal culminating in a festive performance of music for stringed instruments.  Becki’s arrangements for violin / fiddle and other stringed instruments are so well loved we felt they deserved a more public airing!  Players of all bowed instruments are invited – fiddle, viola, cello, doublebass, nyckelharpa for example – and all abilities except complete beginner are welcome. Becki and Miranda will lead in intensive workshop and rehearsal day and direct a group performance in the evening as part of an evening’s Fiddle Orchestra Concert – the group will perform alongside solo and duo performances by Becki and Miranda. The music will have a decidedly festive twist and will be sent out in advance so players can prepare.

This is an intensive rehearsal and performance skills day of workshops for fiddle players of all ages who can play folk dance tunes up to tempo either from the music provided in advance.

The performance on Saturday evening starts at 7.30pm and will finish around 8.30pm.

If you want to make more of your visit or give yourself additional time to settle into the relaxed Halsway way of life you are welcome to join the tutors on the Friday evening for dinner and informal music session in the bar and / or stay overnight with B&B on the Saturday after the concert.

An intensive weekend for fiddle players of all ages and abilities – with the exception of complete beginners. You’ll need a basic grasp of your instrument and to be able to play from the music provided in advance after the day of rehearsal.

Becki Driscoll  is a musician, singer, composer and educator with many years’ experience. Based in the heart of the West Country she has a deep knowledge on love of our local – and wider – folk traditions.

Becki leads educational projects and workshops for festivals and specialist courses, ranging from beginners fiddle sessions, to mixed-instrument folk orchestras for all ages. She leads the prestigious English Fiddle Weekend at Halsway (together with Nick Wyke), and is an Associate Artist for Wren trust for whom she has led numerous community music projects including the Folk Orchestra of North Devon, the Fiddle Orchestra of Devon, regular music groups with children and young people, and a specialist early years project she developed with Bideford Bay Children’s Centre

She performs with Nick Wyke and the duo first collaborated on a busking trip around Spain and Portugal. Since then, they have made a strong impact on the British folk scene and received national and international acclaim. The duo’s compositions and their interpretations of traditional English tunes and songs are influenced by a wide range of musical cultures: “We are inspired by the people we meet and the places we’ve been.” Their style is unique; Becki’s melodic, emotive violin and viola blends with Nick’s driving fiddle chords and powerful vocals to create a rich, captivating sound.

Miranda Rutter took up the fiddle at 5 but soon had her ambitions set on playing the viola. She studied classical music in her youth and was a member of Pro Corda, but on meeting folk music in her late teens became enchanted. She became a member of Jabadaw and Fika while at Manchester University studying Social Anthropology. After a couple of years of travelling (both musically and geographically) she found home playing southern English folk music at Chris Wood’s first summer school at Ruskin Mill.

Inspired by the idea of making folk music that explored the sound and ensemble dynamic of the string quartet, she formed Methera – a string quartet with roots firmly planted in English traditional music. Their national tours, BBC Radio 3 broadcasts and collaborations have helped them establish a reputation as a scintillating live act, blazing a trail through the uncharted territory that lies between folk and chamber music.

She has also performed with the English Acoustic Collective and Morris Offspring in ‘On English Ground’ and with Chris Wood in his composition ‘Listening to the River’. She has taught on Newcastle University’s Folk Music degree course, on National Youth Folk Ensemble courses, at Folkworks’ Fiddles on Fire Festival, and on the English Acoustic Collective summer school which she co-directs.