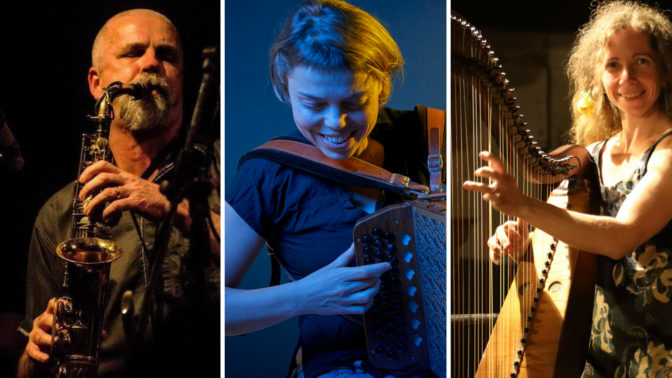 Paul James is a saxophonist, bagpiper, singer and composer from Newbury who writes, arranges and performs music influenced by English and other European folk traditions. Paul was composer for the critically acclaimed production of John Milton’s ‘Comus – A Masque in Honour of Chastity’ at Shakespeare’s Globe Theatre and has composed music for TV, documentaries, theatre and contemporary dance, as well as the bands he plays in. He has been a member of the hugely influential folk band Blowzabella since 1980, and plays with his pan-European band Evening Star and the folk dance band The Playford Liberation Front.

Anne Niepold studied in the jazz department of the Royal Conservatory of Brussels and attended many courses and masterclasses. As a performer she is a true force of nature – brash, adventurous and phenomenally skilled, she takes the humble accordion in startling directions. Beside her solo projects, she performs with numerous arts companies at home and abroad, and has numerous recordings to her name.