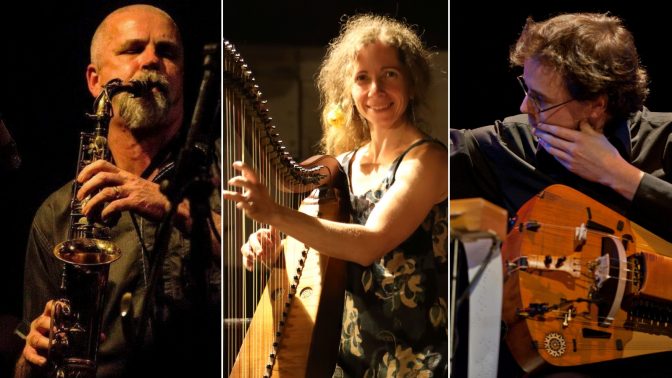 Alongside musician/composer/arranger Paul James – saxophones, border bagpipes (Blowzabella, Paul James and the Drowned Lovers), we are delighted to welcome Spanish composer, arranger, teacher and virtuoso hurdy-gurdy player Germán Díaz  and the return of harpist, composer and teacher Merit Zloch for the second year.

Paul James is a saxophonist, bagpiper, singer and composer from Newbury who writes, arranges and performs music influenced by English and other European folk traditions. Paul has toured the world with the influential folk band Blowzabella and composed for TV and theatre (he was composer for the critically acclaimed production of John Milton’s ‘Comus – A Masque in Honour of Chastity’ at Shakespeare’s Globe Theatre). He also fronts Paul James and the Drowned Lovers and plays with the folk dance band The Playford Liberation Front.

Germán Díaz is an award winning musician and composer, known as one of Europe’s hurdy gurdy masters, and for recent works embracing mechanical music.

He belonged to the legendary Viellistic Orchestra and co-founded the symphony quartet the Iberian Zanfona Quartet. In 2004 he created his own label,  ephemeral productions, along with Fernando Fuentes. He has collaborated on more than a hundred recordings and edited numerous works as a soloist, and composed sound tracks for film, theatre and television.

“Germán Díaz is a singular voice with a plural sound, he is empowered to thrill and hold his breath with what he creates, he is able to keep the listener in suspense until the last resonance of the last note of each composition / improvisation. His musical is so broad that it is not worth reducing it to a specific aesthetic. It is better to let your music keep writing your own story regardless of what it is supposed to be. ”
Carlos Pérez Cruz, THE JAZZ CLUB.

“It is clear that Germán Díaz is the Jimi Hendrix of the hurdy-gurdy, or the Miles Davis of our folklore.”
Pablo Sanz, THE WORLD.