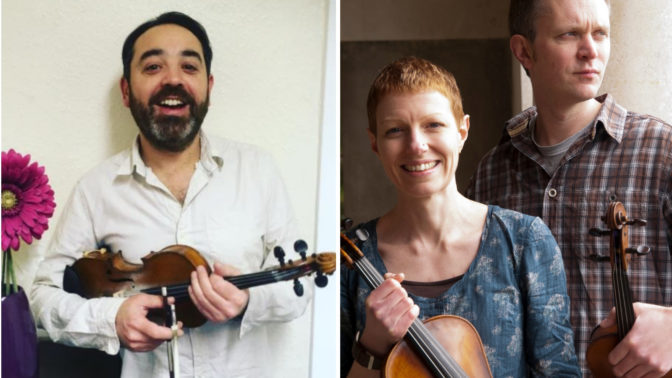 North Devon duo Nick Wyke & Becki Driscoll share a love of traditional English fiddle music and also compose their own tunes. We are delighted to be welcoming Paul Sartin (Belshazzar’s Feast, Faustus, Bellowhead) to join them as our guest tutor for 2019!

On Saturday evening there’s a chance to watch the tutors in action in a public performance at 8pm. Course ends around 5pm Sunday.

Paul is Director of the Andover Museum Loft Singers, and has 25 years’ experience of teaching, as a peripatetic, at university level, and as workshop and course facilitator for TAPS, Halsway Manor, Aldeburgh Music, EFDSS, Stones Barn, the National Youth Orchestra, and at numerous festivals.

Co-editor of ‘Hampshire Dance Tunes’ (Hobgoblin), he has a particular interest in dance melodies of the south, and in fiddle-singing.

He was awarded a First for his Masters in Traditional Music, and in 2007 received a 75th Anniversary Award from the English Folk Dance and Song Society.