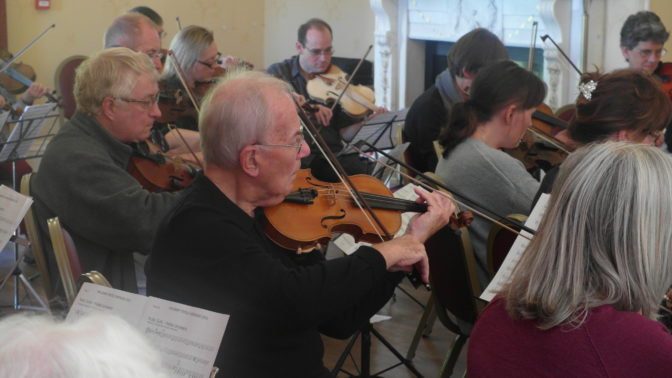 On Saturday evening there’s a chance to watch the tutors in action in a public performance at 8pm. Course ends around 5pm Sunday.

“I have just attended your English Fiddle weekend with Becki Driscoll and Nick Wyke, and wanted to say how much I enjoyed it and what a fantastic duo they are. As well as being so talented, individually and as a duet, they are also wonderful at running workshops. It is a real skill to involve, enthuse and challenge participants with such a wide range of experience and abilities, but their delightful manner combined with very well planned and structured workshops made it an absolute joy. I came home full of enthusiasm (and excellent food!) and will certainly look out for other weekends they are involved in.

Many thanks – and I hope to be back before too long!” Thank you email from 2016

In a successful ten year career, Tom Kitching has worked with numerous singers and bands, including Pilgrims’ Way, Gavin Davenport, Jon Loomes, Gren Bartley, and Albireo. He has tutored at Folkworks Summer Schools, and has lead numerous workshops around the country. Heavily involved in the dance scene, and veteran of over a 1200 gigs, he stands at the leading edge of the English folk scene. His style is English at heart, whilst encompassing elements of many other traditions. It is a unique, vibrant style full of exuberance, energy and wit, yet capable of expressing extraordinary emotional depth. In March 2015, he released his solo album, ‘Interloper’, a deeply personal project to capture the state of the English instrumental tradition and define the role of the fiddle within it.

“Tom Kitching is one of the best English fiddlers ever – he plays with fire and gusto, energy, intelligence and feel – takes English folk music by the scruff of the neck and sends it off laughing and dancing and having a good time.” Mike Harding

Rowan Rheingans is a multi-instrumentalist from Derbyshire, England. Drawing inspiration from English folk music and also european musical influences, Rowan is now well known for her distinctive fiddle playing, voice and 5-string banjo. Both a performer and educator of folk music from a young age, Rowan has also studied traditional music in a number of ways, including spending a year in Sweden where the music she became steeped in continues to influence her work. Rowan tours regularly as part of BBC Folk Award nominated trio Lady Maisery, who have released two critically acclaimed albums of intelligently re-worked traditional material, championing inventive vocal harmony, innovative instrumentation and arrangement. She also tours in the UK and Europe with fiddle-singing sister-duo The Rheingans Sisters, as part of Nancy Kerr and the Sweet Visitor Band and as a songwriter and composer in solo and collaborative projects.