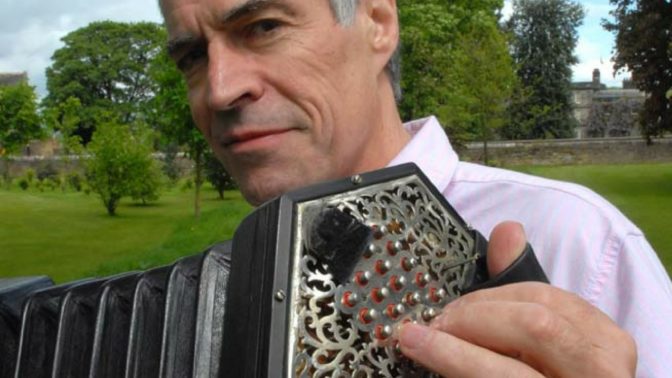 Alistair Anderson is internationally recognised as the master of the English Concertina (and a fine performer on the Northumbrian Pipes!).

“The pleasure comes chiefly from the excellence of the playing. The concertina emerges as a flexible and sensitive instrument; in the hands of a player of Anderson’s quality it is amazing what it can achieve.”  The Guardian

This intensive workshop weekend – limited to 8-10 places – is for English concertina players of an intermediate to advanced level to develop their playing with a master of the instrument. Alistair will be drawing on the music of the North East and beyond but will also be happy to look at repertoire you might suggest. You will be mainly working as a group, but there will also be 1 to 1 tuition, plus time for informal playing and to socialize, and a Saturday evening concert from Alistair!

English Concertina players of an intermediate level and above; you’ll be able to play dance tunes confidently and up to speed, and be wishing to get some new ideas and inspiration.

Alistair Anderson is internationally acknowledged as the master of the English Concertina and a fine exponent of the Northumbrian Pipes. He delights audiences with traditional music from Northumberland and beyond, as well as his own music, which has grown out of his love of these traditions. As a touring soloist, he has no less than 37 tours of the USA, 5 trips to Australia and countless European tours to his credit.

“He remains one of this country’s most majestic and inclusive instrumentalists.” Colin Irwin – fROOTS March 2010

Alistair has a very wide range of experience as a musical catalyst and educator. From starting school ceilidh bands to establishing England’s first folk music degree; from directing summer schools to giving advanced level master classes he has helped inspire a whole new generation of musicians.

As the foremost performer on the English Concertina, Alistair has given workshops and master classes throughout Europe, Australia and North America. His 1974 LP and book Concertina Workshop is regarded as a classic and was recently reissued on CD by Free Reed Records.

Alistair founded Folkworks in 1986 and was its Co Director then Artistic Director from 1988 until 2009. He designed the folk and traditional music degree at Newcastle University and was its Programme Director from its inception in 2001 until 2005, and continues to maintain close links with the course.