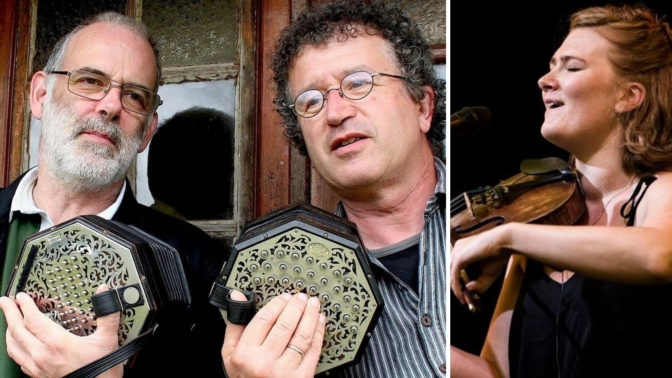 A sublime evening of music and song from across the UK, Europe and Scandinavia with Emmanuel Pariselle, Richard Burgess and Rowan Rheingans.

Richard Burgess is originally from England but has lived all his adult life in Norway where he works as a writer, a translator and, not least, as a singer and musician (on guitar and English concertina) with a repertoire that draws on both English and Scandinavian traditions. Maritime songs are particular favourites and he performs both solo and in a variety of group constellations, including the shanty trio Foghorn, the Anglo-Swedish trio Doggerland, the folk-jazz sextett FatDog and, together with Emmanuel Pariselle, in the Anglo-French-Norwegian folk quintet Five Men in a Boat. Richard will be at Halsway tutoring on the International Shanty and Sea Song Workshop.

Emmanuel Pariselle is well known as one of Europe’s finest makers of diatonic button accordions; he is also one of France’s finest players (and a sublime singer to boot). Emmanuel will be at Halsway tutoring on the Melodeon Accompaniment Weekend.

Rowan Rheingans is a multi-instrumentalist, singer, writer and composer best known for her work with folk bands Lady Maisery, The Rheingans Sisters and Songs of Separation. With these projects, Rowan has won two BBC Radio 2 Folk Awards (‘Best Original Track’ & ‘Best Album’) and is a five-times nominee. Rowan is also a warm hearted and passionate teacher of fiddle music from a wide variety of traditions and styles. She lives in Sheffield, UK. Rowan will be at Halsway tutoring on an Advanced Fiddle Workshop.