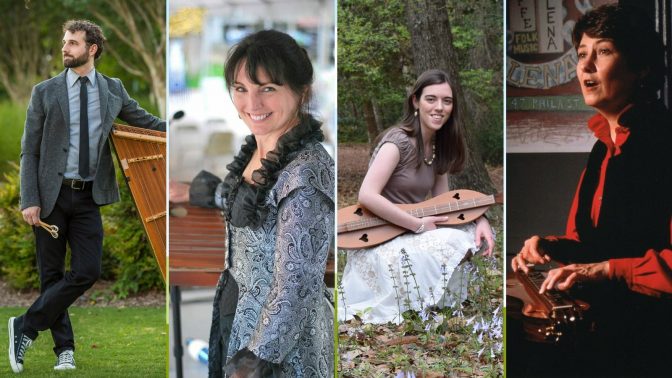 We regret that this event has been cancelled due to the coronavirus outbreak. We hope to run this event in 2021 with the same team. More info.

All skill levels will be catered for.  There will be two broad strands of workshops for both Mountain and Hammered Dulcimer: one for Beginner/Improvers and one for Intermediate/Advanced players. Click here for playing level guidelines. There are instruments available – both mountain and hammered dulcimers – for beginners to borrow – please request early when you book).

Please complete this questionnaire so we can make sure you get the most from the course.

Susan Trump (MD), from Schenectady, NY State, has been a major force in the mountain dulcimer world for many years, with her outstanding instrumental skill and her clear, relaxed teaching style.  She is a much sought-after instructor and performer across the US and has won awards in both banjo and mountain dulcimer competitions.   Susan has released four well-received solo CDs, as well as master-minding the classic “Masters of the Mountain Dulcimer” CD series.  She has also authored several instructional books and CDs.

Stephen Humphries (HD), from Chatanooga, Tennessee, is a former US national hammered dulcimer champion, freelance percussionist, and music educator. A well-known performer and teacher on the US dulcimer scene, he has also written two best-selling method books for hammered dulcimer.  A welcome return to Halsway for one of our most popular tutors.

Jessica Comeau (MD), from Pensacola, Florida, is a young mountain dulcimer player with numerous YouTube followers, attracted by her obvious passion for the dulcimer and her natural charm.  As a lover of music and literature, she is especially fond of music from the Celtic, British, and medieval European traditions. As a qualified teacher, she provides good structures and materials for students, while providing space for them to make the music their own.

Patti Amelotte (HD), from southern California, is well known to the UK hammered dulcimer world, having performed and taught over here for the past 15 years.  She aims to increase students’ musicality, but also build self-reliance and belief – as well as have fun.  Her performances are informal and refreshing.  We’re pleased to welcome her back to the UK again after a few years’ break.