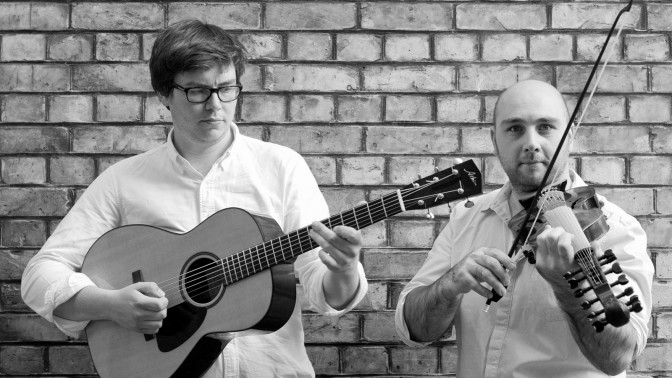 An early evening concert with Dipper Malkin – an inspiring duo that melds new ideas with traditional song and dance tunes, the result being beautifully honed new works, breaking new ground yet routed within the tradition.

John Dipper is a respected and established performer, composer, teacher and instrument maker. He grew up steeped in the traditions of Southern England. His unique playing style, and his compositions convey a deep understanding and passion for indigenous culture. He has recorded on several film soundtracks including The Hobbit.  He is a founder member of the English Acoustic Collective with Chris Wood and Robert Harbron, plays in Methera – the groundbreaking string quartet, and has worked with many other musicians and artists including Hugh Lupton, Nick Hennessey, Martyn Wyndham-Read and James Patterson. He was also a composer and musician for the first ever nationwide tour of Morris OffSpring.

Dave Malkin is a guitarist, composer and arranger. He studied the guitar at Trinity Laban Conservatoire of Music and Dance. His technical facility and theoretical understanding is informed by his classical training, but he has a deep love and understanding of traditional music. He was a founder member of the trio Tandem, merging traditionally inspired compositions with live electronics. He has worked with The Joe Townsend Quartet, under the baton of conductor Andrew Parrott, and ‘Phantom Of The Opera’ lyricist Charles Hart.

“Following the contours of tunes with skill and precision, these two highly talented musicians frame traditional music in all its technicoloured glory. There aren’t many who can sculpt and carve music and song in this way. Their playing is both moving and thrilling, honing in on detail and throwing it wide to enjoy the bigger picture. And they do the greatest service to the tradition by writing new material to keep it alive.” Verity Sharp – Late Junction, BBC Radio 3