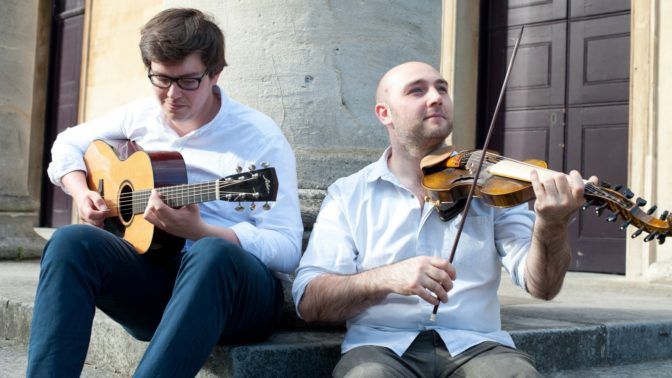 We regret that we have had to cancel this event. Ticket holders will be contacted to arrange refunds.

​Dipper Malkin are rapidly earning a reputation for elevating traditional music to new heights of sturdy beauty and sophistication.

Dipper Malkin is the “potent combination” (Folk Radio UK) of two musicians that have spent their careers to date involved in groundbreaking projects. John Dipper (viola d’amore) was one third of The English Acoustic Collective alongside Chris Wood and Robert Harbron and currently works with string quartet Methera, while Dave Malkin (guitar, voice) was a founding member of trio Tandem, stylishly combining traditionally informed compositions with live electronics.

With their highly-anticipated debut release, Tricks of the Trade, it is clear that Dipper Malkin realise that they are the lucky benefactors of previous generations’ invention, celebrating their inheritance through every note, whilst avoiding the trap of complacency by offering their own inventions.

​“Following the contours of tunes with skill and precision, these two highly talented musicians frame traditional music in all its technicoloured glory. There aren’t many who can sculpt and carve music and song in this way. Their playing is both moving and thrilling, honing in on detail and throwing it wide to enjoy the bigger picture. And they do the greatest service to the tradition by writing new material to keep it alive.” Verity Sharp – Late Junction, BBC Radio 3

The album provides a new lease of life for the viola d’amore, an unusual instrument from the baroque period with seven bowed and seven sympathetic strings. “I began investigating new ways to play more complex polyphonic accompaniments. Discussions with players such as Caoimhín Ó Raghallaigh, who uses instruments with a greater number of strings, led me to experiment with the viola d’amore. I’ve developed a new tuning system for the instrument, which has allowed new compositions to flourish”, said Dipper.

“The greatest compliment we could think to pay to our ancestors, those responsible for this rich and fascinatingly idiosyncratic tradition, is to elevate the repertoire they’ve provided for us”, said Malkin. “We aim to present work on a par with contemporary classical music in terms of its intrinsic artistic value, produced to the standard of a big-budget release, as thrilling and accurately executed as improvised jazz, but most importantly rooted in our tradition.”