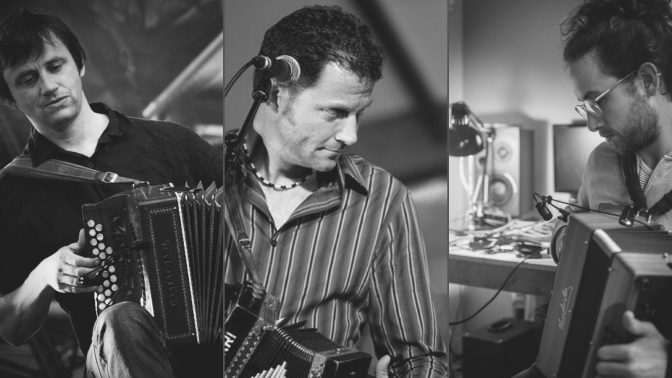 Our DG Weekends at Halsway are hugely popular and book-up well in advance. We’re delighted to be welcoming Andy Cutting back to the team, joined by non-other than Saul Rose! Regrettably, due to COVID restrictions Anne Niepold is unable to travel from Belgium to join us this year; we’re delighted that Archie Churchill-Moss has agreed to tutor in her place.

This weekend is not aimed at total beginners. You’ll need to have a basic grasp of your instrument – as a guide you should at least be able to play simple tunes with both hands together – with plenty to inspire and challenge more experienced and accomplished musicians. There will be a busy programme of workshops (each group will spend time with each tutor) plus time to socialise and take part in informal sessions plus an informal tutor’s concert on the Saturday evening.

“I really enjoyed the weekend. The accommodation and food was lovely, such a special house. Being in close touch with such good teachers and great musicians, so inspiring.”

Players of the D/G melodeon (diatonic button accordion) of all levels except complete beginners. You’ll need a DG melodeon (2 row, 8 bass as a minimum). The course is taught predominantly by ear at all levels.

We’ll be asking you when you book to pre-select the group which best suits your current ability level so that we can keep group sises manageable. If – come the weekend – you feel you’re in the wrong place, there will be the possibility to move group at the tutors’ discretion. The three tutors will work with all three groups, allowing you the experience of learning from each of them.

Please make sure you read our Halsway Workshop Levels guide, to help you choose the most appropriate group. Also while we commend ambition, please be realistic about what your playing level will be next May!

Music is not sent out in advance for this course. Teaching is generally by ear with scores available for you to take away. All tutors are happy for you to make video or sound recordings for your own use, so bring a recording device as well as a  notepad and pen!

Andy Cutting  needs little introduction. Hailed as one of the country’s most beloved folk musicians and three-time winner of BBC Folk Musician of the Year, Andy is an emotive and engaging performer, and a warm and witty tutor.

A soulful and technically outstanding melodeon practitioner with an ear for a fine tune, as well as a thorough grounding in the English tradition, Andy’s influences extend way beyond these isles, particularly to the music of Central France and to the storming Quebecois tradition. He currently performs with Leveret, with Martin Simpson and Nancy Kerr, plus Blowzabella, Topette, June Tabor, and Roger Daltry.

“Hearing Andy Cutting play is like going through the wardrobe and finding Narnia. His music is glorious, joyful, moving, subtle, emotionally charged, a totally spell-binding experience that is never long enough.” June Tabor

Saul Rose has to be one of the most experienced and hard-working box players (and singers) on the UK folk scene. Saul was a long-time member of Waterson:Carthy, winning two BBC Radio 2 Folk Awards with ‘Broken Ground’ and forming a duo with Eliza Carthy with whom he has worked with extensively ever since. More recently Saul has joined Whapweasel, played in Ruth Notman’s band, and formed duos with James Delarre (of Mawkin) and with Maclaine Colston. He is one third of Faustus (with Benji Kirkpatric & Paul Sartin) and is a founder member of folk big band Eliza Carthy and The Wayward Band. He has played on numerous albums as a guest, including Jackie Oates’ album ‘Hyperboreans’, Norma Waterson and Eliza Carthy’s album ‘The Gift’ and the soundtrack for the films ‘Morris- A Life With Bells On’ and ‘Far From The Madding Crowd’. He was nominated for the Musician of The Year award in the 2010 BBC Folk Awards and during 2011 took the part of Songman in the West End play War Horse.

Archie Churchill-Moss: Widely regarded as one of the best players of English traditional folk, Archie has worked as a session musician for some of the UK’s top folk acts (Cara Dillon, Eliza Carthy, Blair Dunlop), as well as performing with the trio, ‘Moore, Moss, Rutter’ – The outfit which saw him receive the coveted BBC Radio 2 Young Folk Award in 2011.

With a contemporary approach to composition and arrangement Archie has developed a style of playing that draws as much influence from the tradition as it does modern popular music. He is currently seen to perform with: ‘Tom Moore & Archie Moss’, ‘Sam Kelly & the Lost Boys’ and ‘False Lights’. His most recent Album ‘Spectres’ by duo Tom Moore & Archie Moss launched in Oct 2020 through Slow Worm Records.

His engaging teaching style comes from a wealth of experience in his position as senior lecturer in ‘Folk Music’ at Leeds College of Music and teaching on the National Youth Folk Ensemble.